I’ve read a few Pulitzer Prize winning books for fiction this year, and realizing that got me wondering: how many of the winners have I read?

I’ve pasted the list of all wining books below by year. The bolded ones are those I have read. It looks like I have read 34 of them. 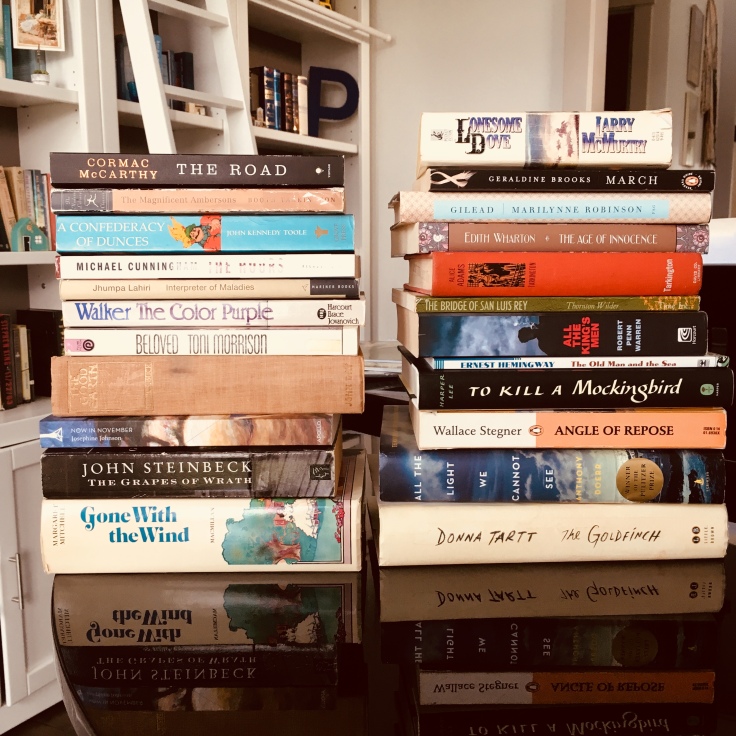 I did not include the runners-up, although I noticed that Joyce Carol Oates, one of my favorite authors, has been a runner-up several times, but has never won. Given her prolixity, I’m surprised. I hope she wins at some point!

On my list to read soon are A Thousand Acres by Jane Smiley and In This Our Life by Ellen Glasgow.

Which ones have you read? And how many? Which ones should I read that I haven’t yet?

1919: The Magnificent Ambersons by Booth Tarkington

1921: The Age of Innocence by Edith Wharton

1924: The Able McLaughlins by Margaret Wilson

1928: The Bridge of San Luis Rey by Thornton Wilder

1933: The Store by Thomas Sigismund Stribling

1934: Lamb in His Bosom by Caroline Miller

1937: Gone with the Wind by Margaret Mitchell

1939: The Yearling by Marjorie Kinnan Rawlings

1940: The Grapes of Wrath by John Steinbeck

1944: Journey in the Dark by Martin Flavin

1948: Tales of the South Pacific by James A. Michener

1952: The Caine Mutiny by Herman Wouk

1953: The Old Man and the Sea by Ernest Hemingway

1958: A Death in the Family by James Agee (posthumous win)

1959: The Travels of Jaimie McPheeters by Robert Lewis Taylor

1960: Advise and Consent by Allen Drury

1961: To Kill a Mockingbird by Harper Lee

1965: The Keepers of the House by Shirley Ann Grau

1967: The Fixer by Bernard Malamud

1968: The Confessions of Nat Turner by William Styron

1972: Angle of Repose by Wallace Stegner

1973: The Optimist’s Daughter by Eudora Welty

1975: The Killer Angels by Michael Shaara

1980: The Executioner’s Song by Norman Mailer

1981: A Confederacy of Dunces by John Kennedy Toole (posthumous win)

1983: The Color Purple by Alice Walker

1987: A Summons to Memphis by Peter Taylor

1990: The Mambo Kings Play Songs of Love by Oscar Hijuelos

1992: A Thousand Acres by Jane Smiley

1993: A Good Scent from a Strange Mountain by Robert Olen Butler

1995: The Stone Diaries by Carol Shields

1997: Martin Dressler: The Tale of an American Dreamer by Steven Millhauser

1999: The Hours by Michael Cunningham

2000: Interpreter of Maladies by Jhumpa Lahiri

2001: The Amazing Adventures of Kavalier & Clay by Michael Chabon

2008: The Brief Wondrous Life of Oscar Wao by Junot Díaz

2011: A Visit From the Goon Squad by Jennifer Egan

2014: The Goldfinch by Donna Tartt

2015: All the Light We Cannot See by Anthony Doerr

2016: The Sympathizer by Viet Thanh Nguyen

2017: The Underground Railroad by Colson Whitehead

49 thoughts on “Which Pulitzer Prize Winners Have You Read?”

What I read in July:
I’ve created a little desk area in the sunniest part of my house so I can write my book! I’m working on an academic study of twentieth century motherhood rhetorics and so far it’s going well. Maybe nobody will ever read it, but I’m loving the process.