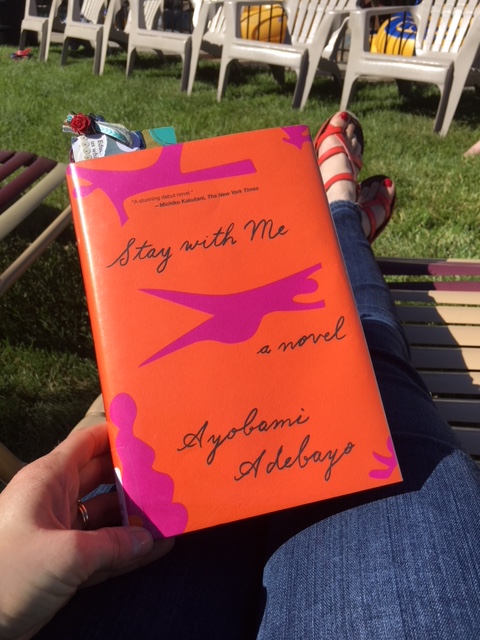 Can marriage survive cultural expectations? That is the central question of Stay with Me (2017) by Ayobami Adebayo, the June 2018 read for the Literary Wives Series, hosted by these bloggers. Check out their posts on this book.

This book isn’t about just wives or just husbands: it is about both. The title Stay with Me refers to plea of every married person and the difficulty it takes to maintain a bond from both sides of those vows.

The story is set in Nigeria, and the wife Yejide and the husband Akin love each other, but the customs of the country and the demands of Akin’s mother tear them apart. Yejide is expected to have babies, and when she isn’t pregnant within the first few years of their marriage, Akin’s family expects him to take another wife in polygamy in order to produce heirs.

Akin reluctantly agrees to take Funmi as a wife, and Yejide is betrayed and hysterical. Yejide knows she is “supposed to kneel down, bow my head like a schoolgirl being punished and say I was sorry for insulting my husband and his mother in one breath” (p. 13). However, she cannot. She is a free spirit, one who warned Akin in the beginning that she does not “do” polygamy. Her own childhood is a testament to her disdain for the tradition.

She begins to believe she is pregnant, and even has all the symptoms: nausea, a growing belly, tender breasts, no periods. However, Yejide’s pregnancy lasts more than a year, and she is finally convinced by doctors that it is all in her mind.

The years move forward, and Yejide does finally have children. Funmi, the second wife, dies after falling down the stairs. Yejide and Akin seems to have found a way to balance their singular love for each other and the demands of Akin’s family.

However, betrayal is revealed at the heart of their relationship. In order to live in monogamy, they have both betrayed each other (and extended family) to keep up the appearance of the dream. And because of these lies, meant to save their marriage, their marriage falls apart. Their children die. An inherited disease is the cause of these health problems, and doctors begin to unveil what is really going on. I don’t want to give too much away, but I will say that some of the secrets of their marriage involve adultery, murder, and impotence.

The novel therefore explores just how strong love can be amid the difficulties of deception. The two deceive each other in noble ways, in gestures that seem to be the only way out (or in). Yet those deceptions ultimately tear the couple apart, and create misery because of their wish to stay together without polygamy interfering.

The story reveals ideas about what it means to be a wife in Nigeria in the last 40 years, but it also unpacks what marriage means, and how marriage may or may not survive cultural demands and outdated beliefs. In this story, both husband and wife do what they can to preserve their relationship, but it isn’t enough. In the face of family expectations, cultural norms, and deceit to maintain the facade, their love cannot necessarily survive. The novel leaves it open in the end to the possibility of moving forward, but so many forces work against the wish of this husband and this wife to make it work on their own terms.

We learn from the novel that marriage is so entangled in the social constructions of society and family that it may not survive when it tries to defy those conventions. In other words, being a wife (or a husband) may depend fully on the expectations surrounding that role, rather than the way that person wishes to fulfill it.

Ultimately, the couple learns that love is like a test, but they question “to what end? Who was carrying out the test?” (p. 229). The book questions why such a relationship should be tested and why culture plays a role in testing and ultimately destroying different forms of love and marriage. Why does culture get to decide? Whose culture gets to decide? And yet, it does. The role culture plays is so heavily intertwined with love and marriage that the couple cannot escape it.

The book is also about motherhood alongside marriage. I am teaching a rhetorics of motherhood class for the master’s program at my university next year, and I may include this novel as one of our contemporary novels to explore against the backdrop of motherhood expectations and norms. It would certainly give students much to think about and discuss, and could lead to a paper or two about international motherhood or the social construction of motherhood. While grappling with polygamy, Yejide says, “I was ready to share. A man is not something you can hoard to yourself he can have many wives, but a child can have only one real mother. One” (p. 100). Motherhood begins to change her ideas about marriage, because it consumes her.

It is furthermore about fatherhood. Akin believes, “There are things scientific tests cannot show, thing like the fact that paternity is more than sperm donation. I knew Sesan was my son. There was no test result that could change that” (p. 161). His views on fatherhood are informed by his love (and his involvement in deceit), but they speak to the truths that so many of us know: that parenting is about putting in the time and loving the child.

I really enjoyed this book. It is gritty, enlightening, culturally visceral, and realistic. I’m not surprised that it was a finalist for the Baileys Women’s Prize for Fiction. Give it a read!

10 thoughts on “Literary Wives: Stay with Me by Ayobami Adebayo”