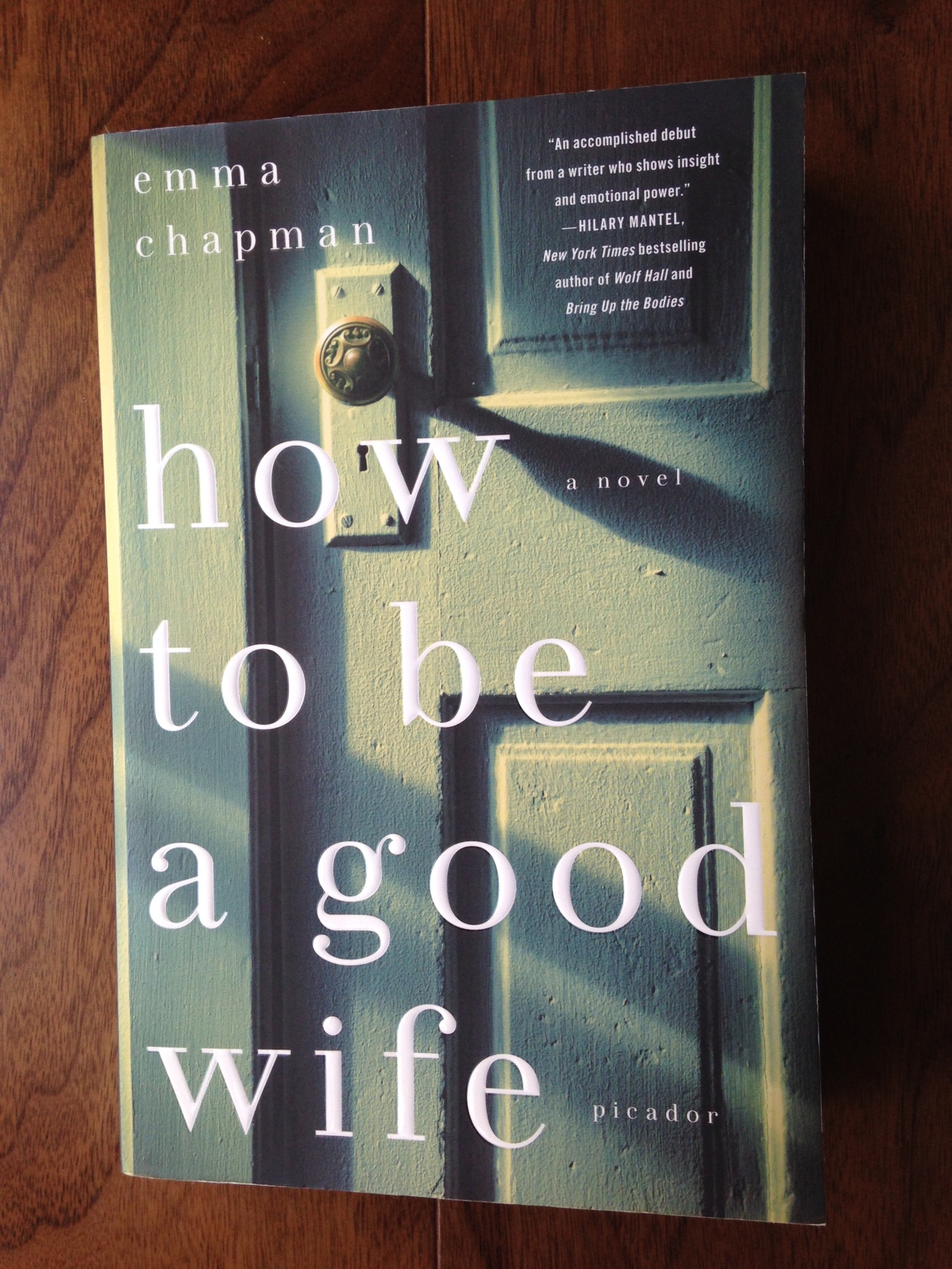 Is a good wife somebody who is exact in self-sacrificing and serving her family? Is a bad wife one who is crazy, perhaps while pursuing autonomy?

These are the choices presented in the character of Marta Bjornstad in Emma Chapman’s How to Be a Good Wife (2013). We review this novel as part of the Literary Wives Series, which includes the following bloggers.

We read a novel about wives every two months an answer the following question.

As mentioned previously, there are two interpretations to answer this question, possibly more for this particular book. I will focus on the two that are dichotomous and most obvious to me.

Marta has been married for 25 years, she has a grown son, and she lives with her husband. She is constantly checking the time and performing according to a book her overbearing mother-in-law gave her when she married: How to Be a Good Wife. The book suggests things like “Never question his authority” (p. 18), “children need order and routine” (p. 13), “you must persevere when cleaning glass” (p. 6), and “Take small mouthfuls of food, like a baby bird, and make sure to chew daintily with your mouth closed” (p. 46). Marta follows these routines and puts her husband first. She is careful not to upset him with her thoughts or feelings and when he seems troubled, she is sure to ask about his. 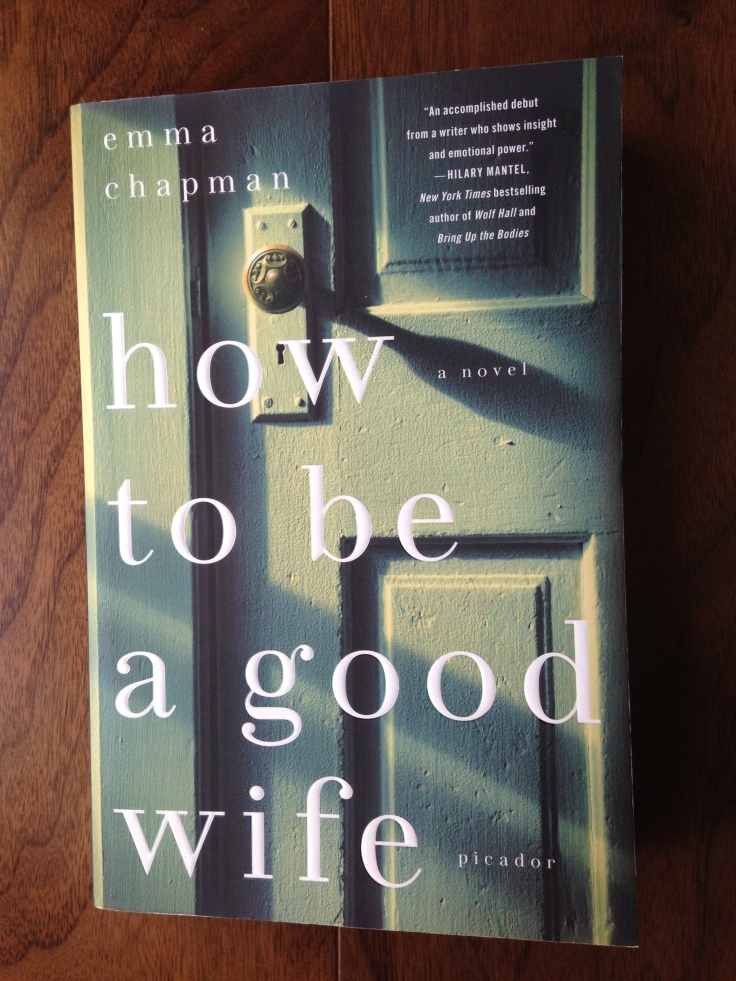 However, Marta has recently stopped taking her pills. These pills have been part of her routine since she married Hector. He found her thin and ill after her parents died in a car accident. He took her in, nursed her back to health, and they eventually fell in love and married. This is what Marta has been told. “I am afraid without Hector here to explain, I will start doubting him again” (p. 153). Now that her pills are wearing off, she isn’t sure if she believes anything Hector has told her. “Does he just like me quiet, drugged, agreeing with everything he says?” (p. 158). She begins to see and remember incidents about a girl who was a ballerina, who was locked in a dungeon, and who used to smoke. Marta begins smoking again. She longs to see more of these “hallucinations” and images of the trapped girl and tries to figure out what they mean.

Is she going crazy? Or is she remembering her past, a past that Hector has hidden from her?

This is the central theme of the novel. As readers, we never get a definitive answer to these questions.

She eventually “finds” a dungeon underneath her house, and she realizes that Hector was her kidnapper. He starved her and then pretended to bring her back to health. He has drugged her for years to keep her past fuzzy and to move forward with her as his dutiful wife. Or has he?

Marta believes that he has. She remembers that she is the girl she has been seeing and that she was kidnapped from the city after ballet practice. She remembers that her real name is Elise, and she runs to her son’s house in the city, trying to tell him what she has remembered and discovered.

Nobody believes her. She is institutionalized. From there, she makes a plan and carries it through, eventually ending her torture as a victim of kidnapping by tricking everybody into thinking she is sane and then killing herself. (Sorry to give it away, but this point is key to understanding what a “wife” is expected to be in her context.)

It is tragic and yet demonstrative of the self-sacrifice she has learned as a wife and mother. She spends the better part of a year dutifully improving herself in a facility and pretending that she is being treated, all the while believing that she is Elise, the long-lost victim of a kidnapping. She then attends her son’s wedding under supervision. She gives his wife the book How to Be a Good Wife, with an inscription at the back telling them goodbye. She escapes the wedding and throws herself into the sea. She enacts the sacrifice Hector taught her. She was bothering her family with her memories and her identity. She was bothering the doctors. And since her son Kylan could not find evidence of an Elise being kidnapped on the internet, she did what she did best. She played the role and then sacrificed herself. In some ways, her suicide is the greatest act of autonomy she performs. Yet it is convenient for Hector, who might be a kidnapper and wishes to keep it quiet, and Kylan, who does not believe her because of past instability. It is also another act of self denial and sacrifice that has characterized her entire adult life.

She is a wife and a mother who has no place to go. Ultimately, she must disappear, much as she always has. During a dinner party in which she met Kylan’s fiancée, she thinks, “It seems like without me, everything has continued as normal” (p. 143). Several times she describes herself as invisible, and this only changes when she asserts her will and talks about what she remembers and feels.

What do I think in terms of whether she is crazy or remembering a traumatic past? I don’t know. As I read the novel, I believed she was discovering a hidden past. I believed that she had been kidnapped. However, Marta is an unreliable narrator. She really is unstable, and this becomes evident when she hosts the dinner party to meet Kylan’s fiancée and she acts horribly. She is clingy with Kylan and dismissive of Katya, despite the young woman’s kindness and caring. In Marta’s interactions with other people, we see a side of her that is strange and seemingly crazy. She seems unable to disconnect from her son and capable of great cruelty and irrational behavior.

So the question of whether or not she is crazy or remembering a true past is unanswered for me. I’m curious to hear what the other Literary Wives bloggers say about this.

And if you’ve read this novel, I’d love to hear your take on it as well.

The next book for October is American Housewife by Helen Ellis. We would love to have you read and blog along.

24 thoughts on “Literary Wives: How to Be a Good Wife”

Join 37,625 other followers
Follow The Bookshelf of Emily J. on WordPress.com