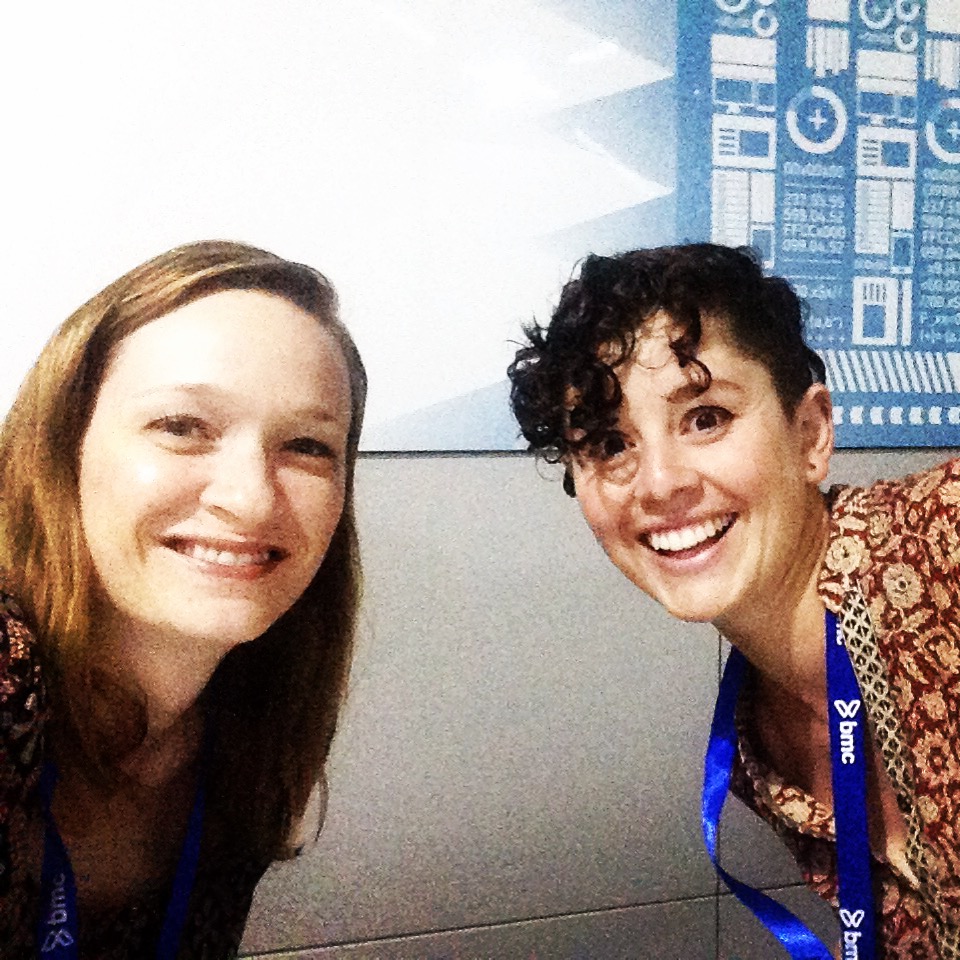 I don’t usually like or use foul language, but I must share with you the fact that Breeanne described our travels yesterday as a “shitshow,” a term now used to also describe the Republican National Convention because of norovirus. But I digress.

We woke up at 4:30 yesterday morning to leave Pune, India, where we successfully conducted dozens of interviews and had a lovely time. We ate spicy samosas for breakfast at the airport and got on a Spice Jet airplane (we love the name!) to fly to Delhi. It was overall comfortable and similar to flying Southwest in the United States. Thankfully, they didn’t play or sing any corny music at our landing in Delhi. 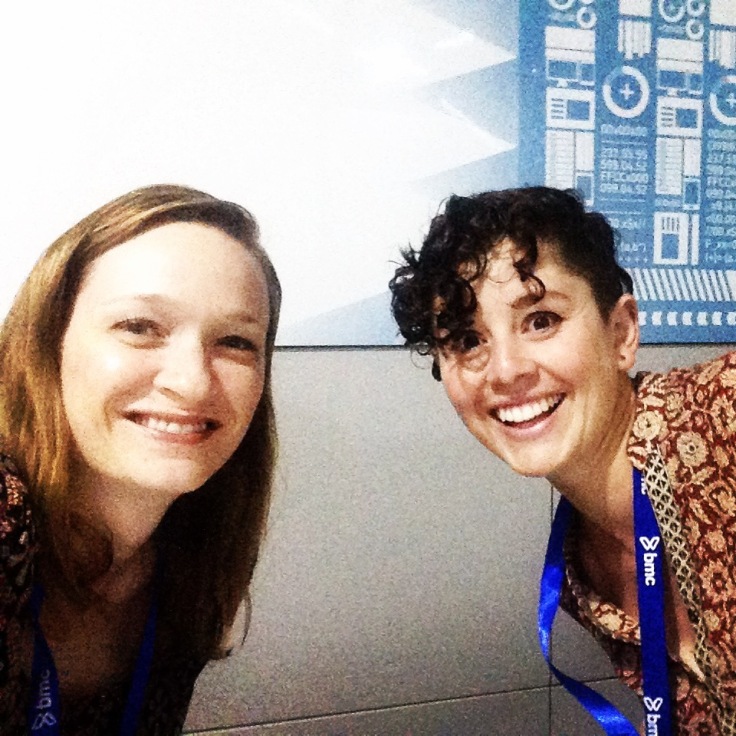 Once out of the Delhi airport, we took a bus to the metro station. We got on a sparkling clean metro car and headed for the train station. Once we got to the train station around 10:30 a.m., the craziness began.

People selling wares and rides accosted us. We were able to move past them quickly, despite carrying all of our luggage, and cross a crowded street of buses, cars, auto rickshaws, and food vendors to the train station. Once “inside” the open-air station, we stepped over hundreds of people laying on the floor, which was also covered with litter, urine, and yes, even feces. We found a counter, but soon realized that the ticket sales were for Indians only. We had to buy ours at the tourist information bureau. A man stopped to tell us where to go. He made us follow him upstairs where we could see the sign pointing us in the right direction. But we soon realized he was a tout, there to misdirect us into buying overpriced tourist tickets from his office. We ditched him and kept wandering; we found a tourist office, but it wasn’t the right one. They told us we had to take a bridge over the tracks to the right one.

During all of this, it was at least 99 degrees Fahrenheit and we were carrying large backpacks on our backs (complete with the books I ridiculously bought!) and smaller backpacks as well. My back is sore. My neck is sore. My feet were swollen by the end of the day.

We eventually made it over the bridge, which we think was a loading platform that required some sort of security entrance that we had somehow bypassed. We made it out and around another building, and there we saw many large signs pointing us to the tourist bureau office. However, as soon as we stepped in the right direction, a man greeted us and told us to go the other way. Stupidly, we followed him. He left us in a dank, urine-filled area of the station that was again only for Indian purchases. Another man approached us with a badge, saying that he worked there and would show us where to go, yet he wasn’t wearing a uniform. We started following, all the while sweating and aching, but we soon realized he was directing us to leave the train station. He did not work there at all.

Breeanne, being savvy and outspoken, told him to leave us alone and she walked away. He yelled at us and claimed he was treating us like his own “sisters.” Being the feminist she is, Breeanne said sarcastically, “Yeah, I’m sure he is. We know how people treat their sisters.” We made our way back across the lot and the traffic to the original signs we had seen and finally found a staircase leading up to the tourist office that was obscure and dark. No wonder it was so common for touts to stand there and misdirect people. It was hard to find.

We purchased our train tickets, but the train was delayed. We waited in the office, which was thankfully air conditioned, for about four hours and then boarded the train on a lower platform.

It was dirty and crowded and again smelled like urine. The seat across from us had some sort of food stuck to it in large globs, but a man came and laid down on it like it was no big deal. Everybody took their shoes off. We did not. 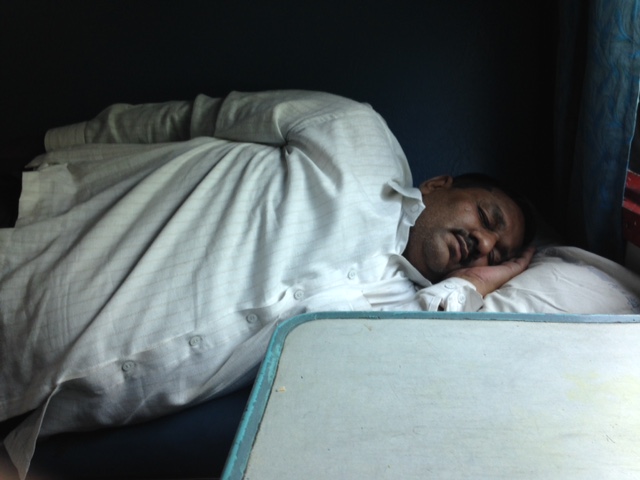 We have become close on this trip, but on this train, we reached a new level of cuddling. It created a lot of anxiety and we stuck together. The one highlight was when a cute girl came over to say hi to us. She was adorable and we giggled a lot. 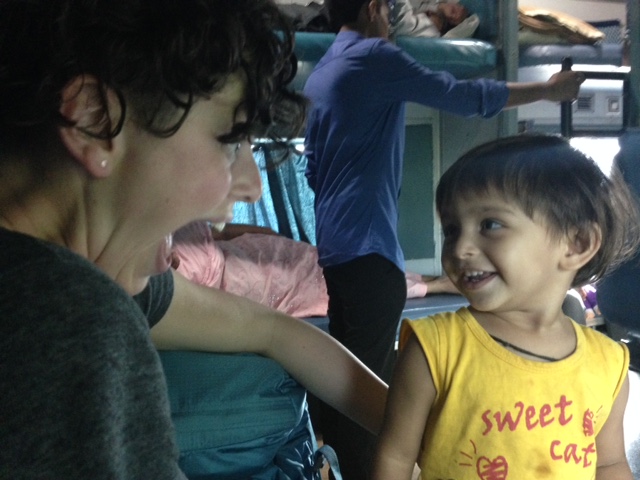 Here is our view from the train. 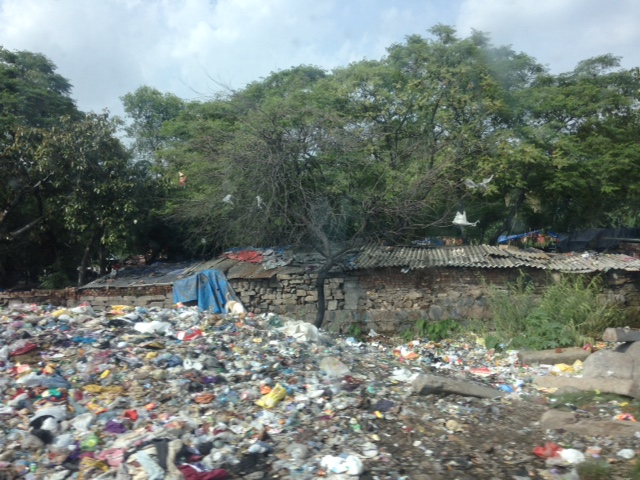 An unfortunate reality of India is that there is garbage everywhere. We witnessed the bus driver collect all of our tickets and then throw them on the grass. We see people peeing in the streets, and often tiny shacks with corrugated tin roofs surround new developments of skyscrapers. The poor are very poor and the rich are very rich. The poverty is heartbreaking and overwhelming.

About four hours later, we arrived in Agra. We had not eaten all day. We had only had one bottle of water each, and we had avoided drinking because of the filthy squat toilets on the train. It was quite the experience. 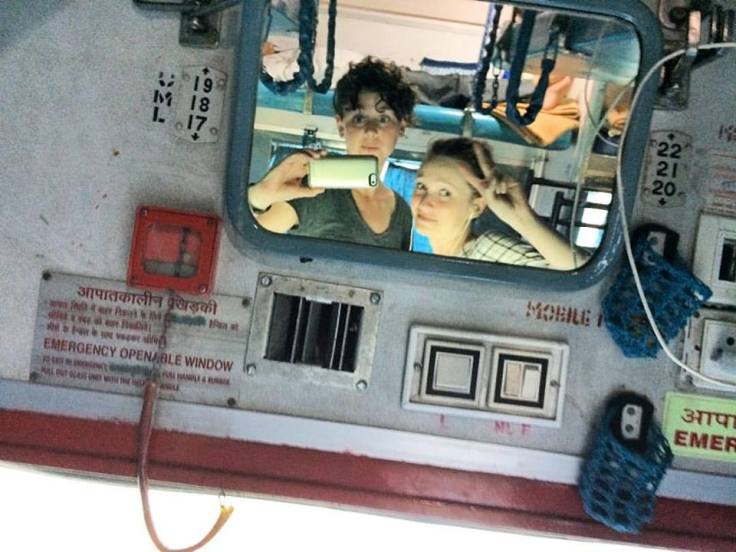 It was a relief to reach our hotel via taxi and order some pizza, a luxury we know that the people we have witnessed on the streets everyday do not have. We went to bed early, but not before having a good laugh over the shower situation. The shower walls were all glass, even looking into the bedroom. We laughed about how we had become close on this trip, but not THAT close. When the bellboy brought our luggage, we asked him about how to cover the shower. He showed us a switch that lowered a shade over it. We laughed and laughed. 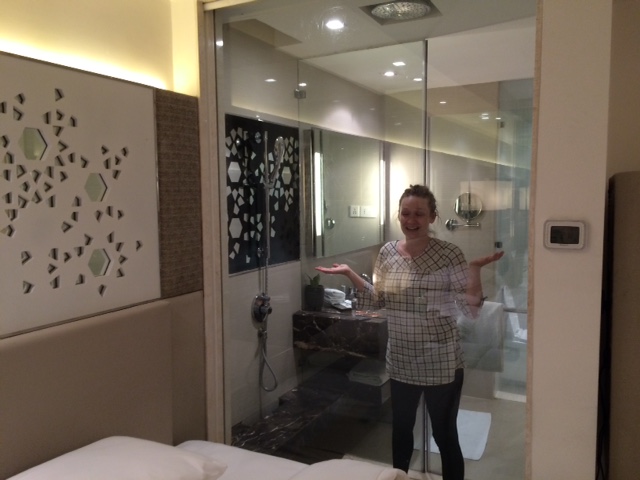 24 thoughts on “Planes, Trains, and Automobiles”