Soledad climbs the pepper tree in their new backyard, a small house Mama has rented down the road from Abuela’s. The rough bark cuts into her hands, a feeling of adventure and hard work accomplished. Francis is below her, whining that her finger is bleeding, a tiny spot of blood sitting on the surface of a very tiny scratch. Soledad tells her forget about it and keep climbing. Manuel is at the top now, anxiously telling the girls to hurry and see what he sees. 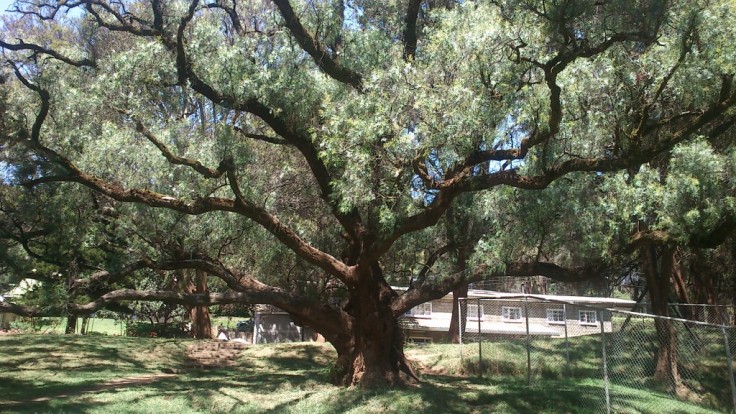 Soledad pushes herself to the next branch, a tangle of soft, flat leaves brushing against her hair and face as she moves upward. She gains her balance, then reaches a hand down to Maria, who is still complaining about the roughness of the trunk, the horribleness of climbing a tree. The two sisters grapple over each other to reach the top, where Manuel is perched like the captain of a ship, his hair being gently blown in the wind, his arms out wide to feel the breeze. He puts a hand over his eyes, then points to his find. There’s Jack and Jane, the mules down the road who are so friendly and love to eat. Maria calls out that she can see them too, just over there, she points for Soledad.

Soledad finally spots them, standing in the middle of their field, munching on tall, dry grasses. She scans the view, searching for something to show her siblings, something they’ll be glad she found.

Manuel calls out again that he sees Abuela’s house, and inwardly looks toward the orchard he once roamed and discovered. There isn’t much enthusiasm in his voice, and Soledad and Maria don’t bother to truly look at the house, for they have already seen too much of it. They look down the twenty feet to their own yard, the one they would rather dwell on.

Maria interrupts the mood by spotting a flagpole, tall and shiny, the stars and stripes waving wildly in the air. The children whoop and holler, pointing at the flag. Manuel pretends to be a flag, letting his torso whip this way and that in the wind, his shirt billowing as well. Soledad begs him to stop. She doesn’t want him falling. Maria agrees, a tear trickling down her face. In her mind, she has already lost her brother. She can see his body in a heap in the dust below, blood trickling from his mouth, his eyes open in a gruesome manner. She feels more tears threaten her eyes, burning and seeping until she cannot see.

Soledad then notices what she thinks is wonderful. She shouts that below the flag is a school, and see all of those children coming out now? The children are streaming through the doors, filling the playground with their shouts and laughs. They are colorful ants, swarming over the swings, the slides, and the soccer field. The girls are dressed in brights and pastels, their anklet socks rimmed in lace and shiny black shoes picking up dust from the tanbark.

Manuel watches in awe, wondering if he could sneak over there one day and play soccer with the boys. He notices their strong legs, kicking with such force into the goals. He also notices their trousers, neatly pressed and mended, no holes to speak of. He tries to push this out of his mind, the fact that his pants are not quite as good, wanting to only focus on the game, the thrill of kicking the black and white ball.

Maria cries out that she wants to go to school, to play on all of those huge contraptions, to feel the hot metal on her legs as she whooshes down the slide, to hold the end of a jumping rope while another girl gives it a try.

“You’re too young,” Soledad tells her. It is true. Maria is still four. Soledad and Manuel are old enough to attend, but they know, deep in their dreaming hearts, that they cannot go. Even if Mama had the dinero to send them, what would they wear?

Soledad knows that the girls with the lacy socks wouldn’t want to be around her, with her bare, mud-caked feet. Sure, Mama washes all the mud off with a vigorous scrubbing each night, but it always comes back after a hard day of play. Soledad yearns to know what those shoes would feel like, shiny and soft and new, on her feet each day. She realizes this is a dream that won’t come true, a wish that Mama cannot grant no matter how wonderful it would be. Soledad’s heart begins to hurt, the pangs of envy and justified pride taking over. Manuel is feeling the same, his manly exterior growing tougher and tougher, not wanting his sisters to see he is also aching to belong, to wear the clothes and play the games that would make him part of the crowd.

The children do not search for anymore sights, do not point excitedly at a faraway place they recognize. They instead climb down the tree, Soledad catching a glimpse of the grocer’s place but not drawing attention to it. She slips the last few feet out of the tree, then reaches down to dust her feet. Manuel runs toward the shack without looking back, dusting his feet on a woven mat Mama has placed there. Maria walks away from the tree slowly, wiping her hands on each other and examining her scrapes. She walks on her toes behind her big sister, who does the same.