I’m taking a cynical approach with this month’s Literary Wives book pick, My Father’s Wives (2015) by Mike Greenberg. It seems to me that the book taught that wives are expendable and that wives are always there for children, even when those children aren’t their own. I’ll explain in more detail later, but first, let me remind you of or introduce you to the Literary Wives Series.

Every two months, a group of bloggers reads a book with word “wife” in the title, and we attempt to answer the following two questions in our posts for that month.

Please visit these other fantastic bloggers for their take on this month’s books, and if you’d like to join the conversation, on our blogs or on yours by reading along, feel free to do so. 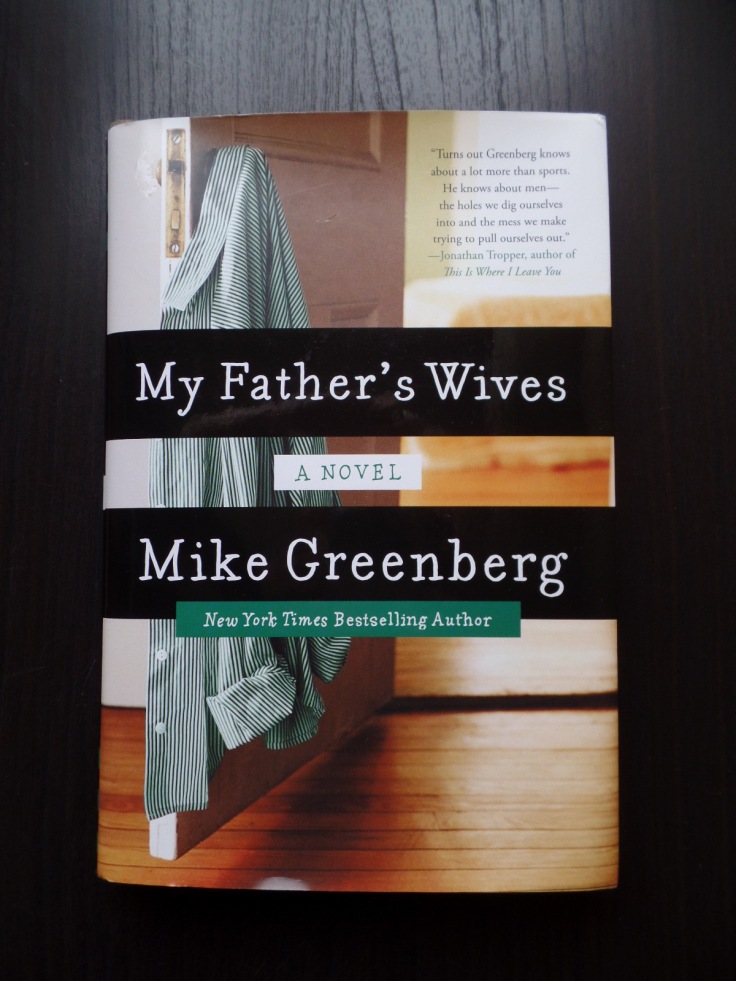 Let me explain my cynicism. This book is about a grown man who suspects his own wife of cheating. He spirals downward and ends up going for a night on the town with his wild and rowdy boss, but in the end turns down extramarital sex with a woman he doesn’t know. So, we’re supposed to think he’s a good guy. But in my opinion, a good guy wouldn’t have ever asked his boss to take him out partying for the night knowing that it would involve drugs and prostitutes.

As Jonathan Sweetwater continues to wonder about his wife, he begins to wonder about his past and his father’s past. He didn’t know his father well, but he was apparently a well-known, high-ranking senator who married some six times. Jonathan’s mother was the first wife, and while his mom can tell him about his father from the perspective she had during that short time, she can’t reveal everything. So Jonathan seeks out the rest of his father’s wives searching to know both his father and himself. From this, I learned that wives are expendable, and that even though they were all discarded by his father, all of them are happy to see Jonathan when he shows up in their lives and they each spend time talking with him about his father. The women do not take center stage in this narrative, despite the fact that they are the ones with the answers and the insights. The book is not really about these wives at all, but instead about men, both Jonathan and his father, and how women play a rather pitiful role in their lives. I dislike this.

My second criticism, that the book teaches us that wives are always there for children, also plays out through this narrative. None of the women turn Jonathan away, or tell him awful things about his father. They all come across as nurturing, in their own ways, and they all help Jonathan in some way. I don’t see how Jonathan necessarily deserves this, or why the women would be interested in talking about his father, but they are, and it helps Jonathan in the end. They seem to help him through a mid-life crisis. And ultimately, he turns back to his own wife for comfort, ease, and happiness. She turns out to be just what he needs. However, I never felt as if the women in this book were getting what they needed, or that their feelings mattered. The book revolved around Jonathan, and the way the women tended to him because, oh, he was so emotionally distraught. I was frankly annoyed by his ability to use these women and think only about himself.

The subtle sexism in this male-centric narrative isn’t always subtle. In the beginning of the book, Jonathan recounts his girlfriends from earlier days. He describes one as beautiful and intelligent. “That was her problem, and ultimately her downfall: too many options. Women that beautiful and intelligent have an almost unlimited menu from which to choose, which sounds like a blessing but is often a curse because they can never commit to anything” (p. 3). What a bunch of sexist B.S., which I’ve heard before from male coworkers. Women have too many choices, my big toe. Women are debilitated by options, oh my pancakes! I guess women are inferior, because the same “problem” doesn’t seem to afflict men at all.

Not only does Jonathan perpetuate this ridiculous detritus throughout the book, crap that no doubt the author believes, the women say stupid things too. One of his father’s wives says, “He was more vulnerable than any man I’ve ever encountered . . . Women are accustomed to men who want us, but there is nothing quite as irresistible as a man who needs us” (emphasis in original, p. 119). What does this mean? That women like being objects, especially when that means they are needed? I’m not sure that all women enjoy being caretakers 24/7, and I would imagine that most women would find even more attractive a man who considered them an equal and who acted as a partner within a marriage, rather than a giant baby who needs his diaper changed.

To top it all off, when Jonathan meets the last wife, she asks if all of them are alike. Jonathan replies, “You all seem sad” (p. 144). I guess this is innocuous, but it bothered me that all of these women, who were used and dumped by his larger-than-life father, are supposedly still mourning him and sitting around being sad, rather than living their own fulfilling lives and moving on. The women do have talents and careers, but these are all overlooked by Jonathan, who only sees them through the lens of his father’s influence. Wives, then, are apparently only “something” in relation to their husbands. In addition, another wife mentioned that in her divorce from Jonathan’s father, that the “only stipulation was that I maintained his name for the rest of my life” (p. 146). Again, we see that women are property and only worth something if labeled, maintained, or connected to a husband.

I made this TikTok and managed to keep my friends from seeing it before we met today. Now that @literaryjourney , @catebutler , and @booksandquilts have their gifts, I can share it here. Enjoy the bookish unwrapping!
Paint your own reality. Be a revolutionary.