In Mette Ivie Harrison’s The Bishop’s Wife (2014), Linda Wallheim is the wife in question. She’s the wife of a Mormon (The Church of Jesus Christ of Latter-day Saints or LDS) bishop, and works to help him in his unpaid work as clergy for their church. She often calms down members of their ward (parish) and finds ways to serve and love when her husband cannot do it all alone. 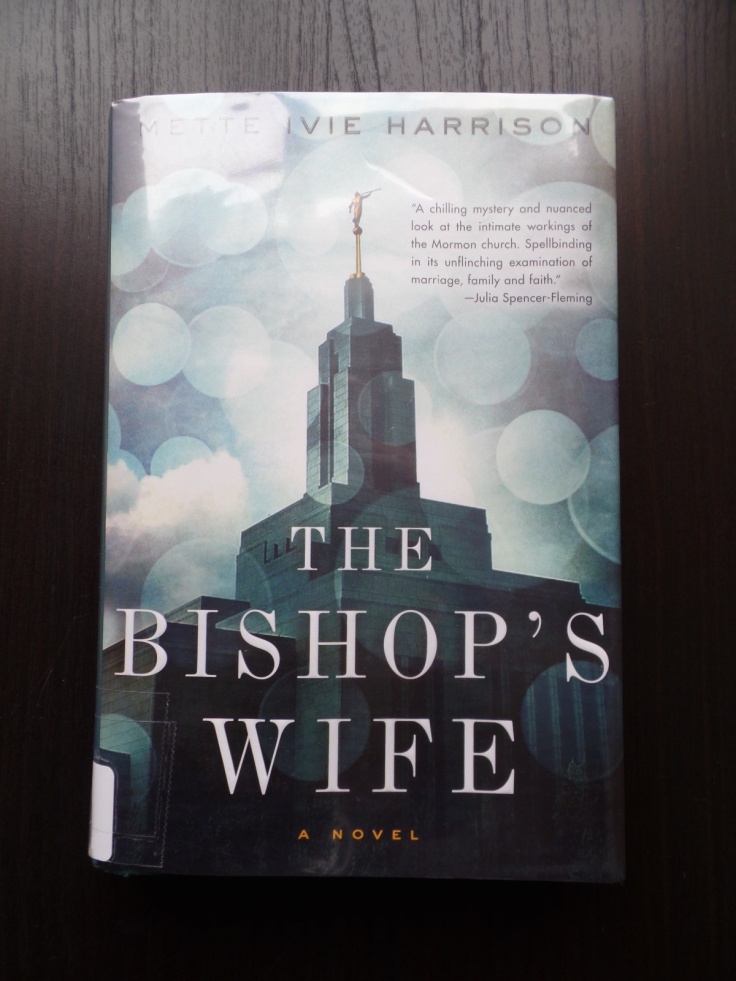 This is the April pick for the Literary Wives Series, in which a group of bloggers read a book with the word “wife” in the title and then try to answer the following questions.

Please visit the following bloggers to see the full conversation about this book and to add your own thoughts.

While The Bishop’s Wife is useful for explaining the intricacies of how the LDS church works on the local level, it is mostly a fictional account of how one bishop’s wife might operate in extremely unlikely circumstances. This novel is mostly a mystery novel, based on events that would be unlikely to occur within the same local area in a short period of time. But that is what makes a good page-turner. We must suspend our disbelief.

One mystery in the novel centers around the disappearance of ward member Carrie Helm. She has left behind her daughter Kelly and her husband Jared, and Linda is unsure of Jared’s ability to care for his five-year-old daughter and if Carrie is even alive. It seems that she may have disappeared under mysterious circumstances, and her parents go to the press claiming that Jared was abusive and controlling. (This story line reminded me of the recent real-life case in Utah in which mother Susan Powell went missing, and her husband Josh was the prime suspect. He ended up blowing up himself and his sons in his Washington state home on a supervised visit. Susan’s body still hasn’t been found.)

The other mystery concerns an older couple, Tobias and Anna. Tobias is on his deathbed and tells the bishop that he has a secret, but isn’t ready to confess. Anna is Tobias’s second wife and she raised his two sons, but nobody seems to know exactly how his first wife died. As Linda spends time with the family helping out, she comes across a bloodied hammer and dress in the garden and shed, respectively. She suspects that Tobias’s first wife is buried in the garden, but she dismisses that feeling because it seems as if she’s letting her imagination run wild, especially since she suspects Jared of killing his wife as well.

These story lines are what kept me turning the pages, and they provide many pictures of what it means to be a wife.

For Linda, being a wife means helping her husband to fulfill his duties as a Mormon bishop. While in my experience Mormon bishop’s wives don’t get this involved in members’ lives, this book gives us an idea of the many tasks required and expected of members of the LDS church. As a wife, Linda is mostly supportive, but she has sorrows and frustrations of her own. While she raised four boys, they had a stillborn girl years ago, and that event still haunts her. She and her husband are emotional about this, but seem to have never dealt with that emotion. She is also outspoken and somewhat unorthodox, but she hides this at times because of her status as the bishop’s wife. She doesn’t want to jeopardize his ability to lead and serve or get into any trouble with church hierarchy for her differing views on certain topics. And she’s secretive. She discovers a lot of interesting and pertinent information to the mysteries, but she keeps them to herself because she’s afraid of what her husband will say or how he will react to her involvement. While they seem to have a good, normal marriage, I think there was a lot of work to be done in their communication skills with one another.

From Anna, we learn that a wife is long-suffering and must put up with being second best or second place. She’s the second wife, and in Mormon doctrine, when people are married in the temple, they are sealed together for eternity. Tobias has never agreed to be sealed to Anna, as he still loves his first wife, and this is a source of pain for her. She wants to ask him about it, but she already knows the answer. “He won’t do it. I always thought he would change his mind. He said that he never would. At least he warned me. He is one of the most truthful people I know. His truth may hurt, but at least he does not hide it” (p. 38). When things blow open involving the mystery of his first wife’s disappearance, she’s disappointed and betrayed because she believed so strongly in his truth telling. Her status as second wife suddenly seems obsolete and unfair. In the end, the details are worked out and she finds a way to see the truth about her husband and respect his life and his decisions. But she’s also eager to find out who she is and to explore the world. She doesn’t necessarily want to remarry after he dies because she doesn’t want to be second place again.

From Carrie, we learn that being a wife might be overwhelming and that seeking protection from a husband might not be the solution to the ghosts of the past. We find out that she was a troubled woman who ran away to pursue a life of sex and seeming freedom, but it doesn’t work. We also learn that despite Jared’s love for her, she has a hard time accepting it. Being a wife (and mother) is work, and if one isn’t emotionally prepared to handle that role, disaster can strike. However, Carrie’s past (which involved being emotionally and sexually abused) accounts for her failings as a wife, and we learn that the truth behind her mistakes has more to do with the way the men in her young life treated her.

Overall, I liked this book. I realize that it was corny and not necessarily high literature, but it was a page-turner and one of the first mysteries I’ve read in a long time. I liked Linda’s relationship with the young girl Kelly, and how she had to deal with her own demons in the midst of trying to comfort others in theirs. She reminded me that “the small arm years” are precious, and that I should enjoy the time I have left carrying my four-year-old (who just turned five) and accepting her many hugs and kisses (p. 181).

This book reminded me that things aren’t always as they seem, and that it is easy to jump to conclusions, but hard to love people in their faults and to show patience and restraint. Linda learns that lesson and teaches it to us as she journeys. Her lessons learned reminded me of a great sentiment: “We are here to love others and improve ourselves, not to love ourselves and improve others.” Linda embodies this discovery and reminds us that it is human to err, but it is also human to learn from mistakes.