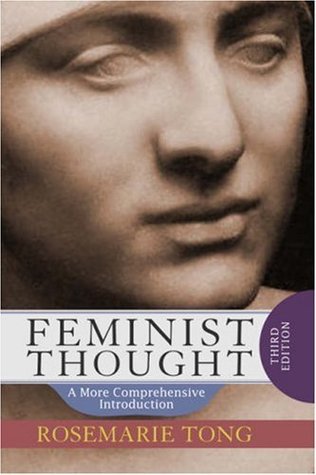 We hear people say this all of the time, and yet they often go on to express “feminist” ideas and could identify as a feminist. There are many reasons why people distance themselves from the feminist movement. I can’t possibly explain or guess them all. But I can explain the different types of feminism according to Rosemarie Tong’s book Feminist Thought: A More Comprehensive Introduction (2009). There are many types of feminism, and we know that “all feminists do not think alike” (p. 1). However, labeling different schools of thought help us to “mark the range of different approaches, perspectives, and frameworks a variety of feminists have used to shape both their explanations for women’s oppression and their proposed solutions for its elimination” (p. 1).

This series will outline and define the many feminisms. Maybe you’ll be able to identify where you agree and disagree with feminist thought.

Liberal feminists stress “the value of individual autonomy” (p. 11). They claim that individuals have rights and that “we can all choose our own separate goods, provided we do not deprive others of theirs” (p. 11-12). This type of feminism has a long history, and began with eighteenth-century thought. Mary Wollstonecraft could be considered a liberal feminist as she saw middle class women as “kept” and limited “from developing their powers of reason” (p. 13). She saw women as confined in cages, and argued in A Vindication of the Rights of Woman (1792) that “unless a person acts autonomously, he or she acts as less than a fully human person” (p. 15). Choice is an important concept to liberal feminists. Personhood is also an important term.

In the nineteenth century, other writers addressed women’s rights. John Stuart Mill and Harriet Taylor (Mill) wrote about these ideas (see my review of The Essential Feminist Reader). Taylor contested “traditional assumptions about women’s supposed preference for marriage and motherhood over a career or occupation” (p. 17).   The writers of this time explored different avenues for allowing women choice in public life and also wrote about ethics and virtues.

Feminists of this century were also asking for suffrage. They believed that “women needed suffrage in order to become men’s equals” (p. 21). This led to the meeting in Seneca Falls in 1848 and the Declaration of Sentiments. However, these feminists failed to address class and race concerns. Their “women’s rights movement focused on the rights of mostly privileged white women” (p. 22).

In the twentieth century, another equal rights movement occurred beginning in 1960. They claimed that “women need[ed] economic opportunities and sexual freedoms as well as civil liberties” (p. 23). This led to many national groups being formed, such as the National Organization for Women (NOW). Betty Friedan, author of The Feminine Mystique, was its first president. NOW was the “first explicitly feminist group in the United States in the twentieth century to challenge sex discrimination in all spheres of life: social, political, economic, and personal” (p. 25).

Some groups became focused on “the so-called sameness-difference debate: Is gender equality best achieved by stressing women’s oneness as a gender or their diversity as individuals, the similarities between women and men or the differences between them?” (p. 27).

The Feminine Mystique was criticized for being “hinged on women becoming like men. . . . To be a full human being is, in short, to think and act like a man” (p. 31). Women began to change this message, including Friedan, and instead focused on being culturally feminine or culturally masculine. Women were urged to stop being like men and instead use their gifts and intuitions to improve and solve problems. This raised the question of can we be different but equal? Or should “men and women become androgynous” (p. 32).

There are two types of liberal feminists, according to Tong. The first is classical liberal feminists, who favor limited government and a free market, view political and legal rights as important, and promote the importance of freedom of expression, religion, and conscience (p. 35). The second type is welfare liberal feminists, who think the government should provide for citizens, want the market to be limited by taxes, see social and economic rights as the condition of possibility for the exercise of political and legal rights, and urge affirmative action (p. 35).

Liberal feminists want “their sons to develop a wide range of emotional responses and domestic skills as much as they want their daughters to develop an equally wide range of rational capacities and professional talents. Complete human beings are both rational and emotional” (p. 40).