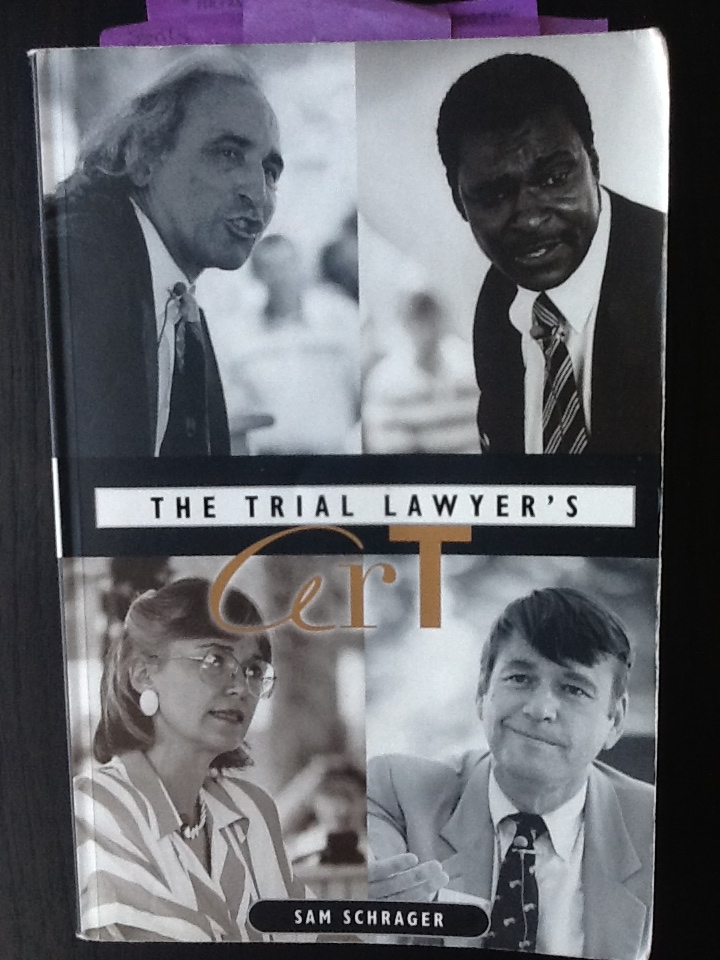 The Trial Lawyer’s Art (2000) by Sam Schrager is a folklore study of trial lawyers as performers and as authorities.  Apparently, lawyers are really actors!  We see this through the personas lawyers take on, such as an aging hippie lawyer from San Francisco, whom juries usually dislike at first and then learn to love because he endears himself to them.  Some of the other lawyers in Schrager’s study used folksy personas or ultra feminine ones to identify with those on the jury.  It seems that they aren’t so much concerned with laying out all of the evidence and making sure that the jury knows exactly what they should be weighing.  Instead, they are interested in winning the acting game with the jury, beating the other lawyer in the process.  They must create a perception of reality that is agreeable to the jurors so that they’ll side with their client.  It is both fascinating to read about this mastery and somewhat disheartening.

Schrager portrays all of this through the results of an ethnographic study.  He observed the lawyers in action in courtrooms, and then at the occupational folklife exhibition in Washington, D.C., where the lawyers performed for event visitors.  Schrager watched all of this and used their performances and the stories they told to analyze what they mean to the occupation of lawyer.

It took me a while to get comfortable reading the study because of the choppy construction of sentences and the overall disconnected writing style, but I found myself more and more immersed in the stories and experiences because of the themes.  The first few chapters of the book focus on performance, and how lawyers use dramatic and rhetorical techniques to be effective in the courtroom.  The second section explores lawyers’ authority or ethos. This can be gained through their repertoires, experience, identification, or their identities.

I found most interesting the idea of repertoire or use of templates to get the work done.  “This consists of the patterns for action the lawyer can summon to meet the emerging courtroom situation” (p. 69).  Schrager goes on to note that these patterns and styles emerge through experience, and as the lawyer gains more of this, she “has a ready-made supply of things to use and has templates for composing new things of a similar kind” (p. 71).

This idea of templates reminds me of a composition textbook called They Say/I Say.  The book focuses on the simple patterns that make up much of academic writing and how students can enter the conversation by learning, copying, and repeating these moves.  The book additionally contains templates to get students started with trying out their voices of agreement and disagreement.  It is a useful concept and something I enjoyed teaching to my 2010 students a few years ago.  Yet skeptics often say that templates are a bad thing because they lock students into certain language or constructions that constrain their creativity and ability to think for themselves. I can understand this argument; however, the use of templates (however conscious or unconscious) by the experienced trial lawyers in this book shows that even seasoned professionals and those in high-profile careers benefit from templates and repetition.

I saw one of these templates as the use of culture.  Schrager explained, “People sharing a cultural tradition (say, rural western or African American) draw on common symbolic resources, yet the particular place where they live also affects their identity” (p. 132).  This type of template played out with the lawyer Roger King, which Schrager observed for his book. King made constant references to popular culture. I worried that his repeated use of these sorts of references could have the effect of alienating his audience.  He often counted on his jury sharing his popular and literary knowledge, seemingly without question. I suppose some of his references could be unrecognized without harm, especially when quoting Robert Louis Stevenson or Dr. Martin Luther King Jr. These names are familiar, and the lawyer is therefore invoking ethos, whether or not the jury is composed of scholars of literature or rhetoric or recent history.  He used this template well because his references, although seemingly obscure, still had the power to unite his audience with the authority of a “famous” speaker or the folksy wisdom of a less-recognized figure.

The use of templates highlights an awareness of audience.  In general, difficult constructions or creatively “organized” speeches or documents are not effective with audiences.  If they have to work to understand the main point or to get the needed information, they will likely become frustrated.  In this, the lawyers’ use of templates, repetition, and parallelism is effective communication.  In fact, in the course of outlining and analyzing the rhetorical strategies of the lawyers, Schrager astutely recommended, “many scholars could take a cue from skilled trial lawyers, who know how to reach their audiences” (p. 16).  Lawyers certainly have expertise in this sort of audience-centered communication.  It is a performance, but it is also a communicative act laden with rhetoric and skill.  I appreciated Schrager’s likening it all to drama.

But this idea of templates, and especially repertoire, is linked to many other fields besides trial lawyers, drama, and composition. In classical music, templates are an important way to distinguish between forms and genres. There is the simple ABA musical format, but there’s also the three movements of a sonata, waltz’s, etudes, and nocturnes. More closely related to the lawyers’ use of templates and variations on those templates is the classical music form of air and variations. In this, composers take one theme and compose many subsequent sections that expand upon that theme. It can go on for seven or more sections. As a junior in high school, I learned and performed Handel’s “The Harmonious Blacksmith,” the final movement in Handel’s Air and Variations, Suite No. 5 in E Major. It begins with a simple melody, and each section becomes increasingly decorated with scales and arpeggios. These, in themselves, are templates that musicians use to improve dexterity and to build the foundational moves of any musical piece. A good pianist is one who practices these technical exercises in order to be able to draw from them in more difficult performances. Similarly, lawyers have these foundational moves, and they draw from them in variations and in performance to build up their own repertoire of craft and skill.

Interestingly, this all might seem formulaic or redundant or boring, as some have pointed out with the They Say/I Say book for composition students. However, my experience with “The Harmonious Blacksmith” in performance is the opposite. Despite its status as classical music, the piece draws large crowds of those unfamiliar with classical music. I once used my lunch hour in high school to practice this piece for an upcoming competition. I closed myself in the band room, but by the end of the piece, laden with scales and the seemingly “heavy” feeling of the Baroque period, there were crowds of students spilling into the room and peeking into the windows. They enjoyed it and applauded, despite its more sophisticated use of templates than the popular music they all adored.

Overall, I appreciated the formulaic style of the lawyers because of its usefulness in any field.  In communication, the lawyers prove that rhetors can rely on time-tested methods and templates while infusing those seemingly boring or stilted methods with stories, performance, identity, humor, and antics.  The section on identity and the stories about lawyers behaving badly or getting the best of the judges was most entertaining, but it all fits into the purposes of persuasion and the templates and repertoire the lawyers use to get the job done.  If that includes less formal ways of performing, it nevertheless proves their skill at audience communication.

Here’s a link to a video of “The Harmonious Blacksmith” in case any are interested in hearing its progression of variation on the “template.”   I think connecting this to lawyers adds more proof of the sophistication of their craft, along with composers.

Although this book is an academic study, it isn’t as dense as some of the others I’ve read. It has enough analysis to have been interesting for theoretical class discussions and enough stories to hold my attention. I even laughed out loud at some of the anecdotes.

If you have a relative or friend who is a lawyer, you or they might find this interesting. I would be curious to see what an actual lawyer thinks of this study.

8 thoughts on “Lawyers as Actors”

Join 37,632 other followers
Follow The Bookshelf of Emily J. on WordPress.com

I read an awesome stack of books during July. Here they are!
I went book shopping while I was in Hawaii over the past week. Here’s what I bought.