I promised to review The Triple Package: How Three Unlikely Traits Explain the Rise and Fall of Cultural Groups in America (2014) by Amy Chua and Jed Rubenfeld after I ended up talking about it on The Katie [Couric] Show in February. In case you missed it, Katie Couric’s producers found my blog on Battle Hymn of the Tiger Mother (2011) by Amy Chua and called me to discuss Chua’s new book on the show. They realized that I fit one of the cultural groups (Mormons, or members of The Church of Jesus Christ of Latter-day Saints) represented in The Triple Package.  They wanted my commentary on the traits these cultural groups use to achieve success because of my criticism of the tiger mother parenting style. I represented what Chua and Rubenfeld call in the new book, “the child made miserable by internalizing too much parental pressure” (p. 155).

So today’s post is that promised review of The Triple Package. I read it on the airplane on my way to be on the show in New York City. I approached the book with a healthy dose of skepticism. I had heard media reports about its controversial theories and perpetuation of stereotypes. However, once I read it, I realized that Chua and Rubenfeld had done their homework and backed up their research (as all good scholars do) with other research. Additionally, they had been careful not to make sweeping claims about different groups. Instead, they were trying to tease out the patterns that make people successful and how those patterns show up in particular groups because of circumstances. In the introduction, they explain that their “topic feels racially charged,” but that the cultural traits described in the book can be empowering to anybody, regardless of their cultural background (p. 2). 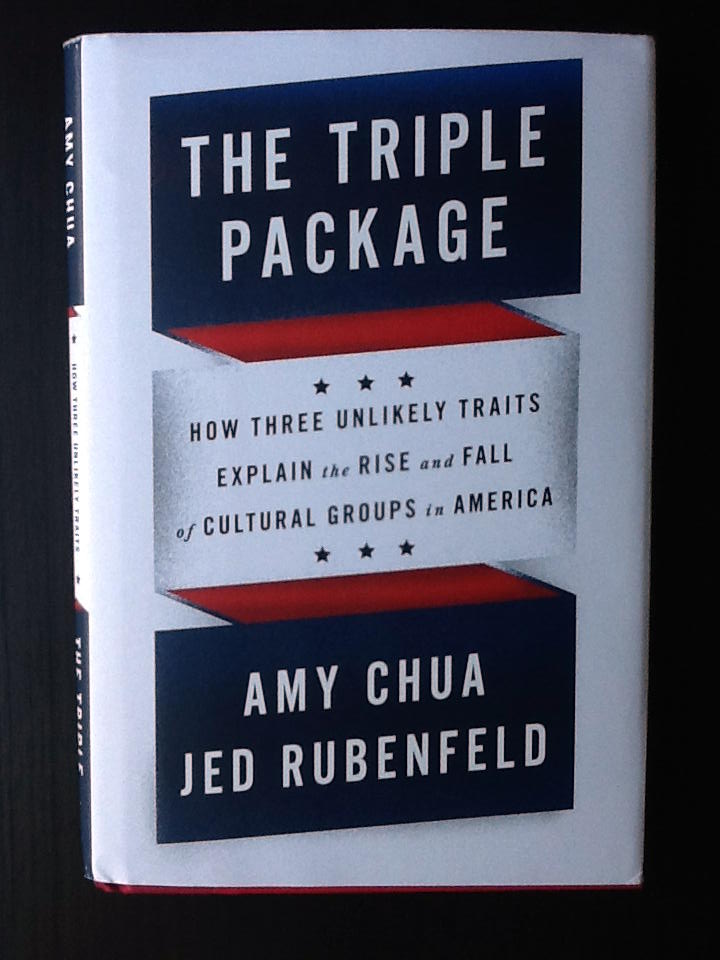 Each chapter includes a section on each of the different U. S. cultural groups the authors chose to highlight. These include Mormons, Cubans, Nigerians, Indian Americans, Chinese Americans, and Jews. The three traits they call “the triple package” are a superiority complex, insecurity, and impulse control. A superiority complex “is antithetical to mainstream liberal thinking, which teaches us to refrain from judging any individual or any life to be better than another” (p. 9). Instead, cultural groups might see themselves as special or as God’s chosen people. Much of the discussion of this trait reminded me of American exceptionalism, which they address in the last chapter. We all tend to see our own communities as special or superior in one way or another. This is a trait that can spur achievement and success.

Rubenfeld and Chua call insecurity, the second trait, “discontent—an anxious uncertainty about your worth or place in society . . . a sense of being looked down on” (p. 9). They explain that immigrants often feel this way, as if they must prove themselves. It seems like insecurity and a superiority complex would be contradictory; however, the authors explain that “insecurity runs deep in every one of America’s most successful groups” and that “there’s a deep tension between insecurity and a superiority complex” (p. 10).

The third trait is impulse control, which is “the ability to resist temptation, especially the temptation to give up in the face of hardship or quit instead of persevering at a difficult task” (p. 10).

Impulse control is something that runs deep in my own religious culture. Members of the LDS Church obey the Word of Wisdom, which tells us to abstain from alcohol, coffee, tea, and to eat healthy foods and in moderation. (I guess I strayed from this with my grilled cheese hamburger last week!) We learn from an early age to resist these “temptations.” Additionally, in my home growing up, I learned early on what it meant to persevere and stick with a task, even when I hated it. At my first piano competition, I played what we started calling “baby songs;” this embarrassing first showing led to increased practice times and learning to compete at higher levels within a few years. We weren’t going to be “shown up” and I wasn’t going to fail at playing the piano. Many kids would likely have given up, and their parents would have let them, but I was taught to work harder and be better.

Impulse control is also described as “inculcating habits of discipline from an early age” (p. 11). This is exemplified by my piano experiences, but I also remember planning in middle school for the Sterling Scholar competition, something I would compete in during my senior year of high school. We were always years ahead when it came to preparing for these very public competitions. My experiences were a product of the three traits. My mother wanted to prove to everybody that we were superior, and this was motivated by a very deep feeling of insecurity. Her grandparents were immigrants from Spain who worked as fruit pickers and in the canneries of California. My mom was the first in her family to graduate from college, and she made sure that her children would do the same. Rubenfeld and Chua call this “a goading chip on the shoulder, a need to prove oneself or be recognized” (p. 11). They note that “[c]ultivating impulse control in children—indeed in anyone, at any age—is a powerful lever of success” (p. 119). I’ve certainly seen the fruit and the consequences of my own impulse control grooming from a young age.

Now these traits might strike you as generalizations, especially when applied to certain groups and not to others. However, the authors assert that “Group generalizations turn into invidious stereotypes when they’re false, hateful, or assumed to be true of every group member. No group and no culture is monolithic. . . . within every culture there are competing subcultures” (p. 14). They reiterate this point throughout, which is what helped me to see past the controversy of the book and to just read it for informational purposes.

I did have fun reading about my own religious cultural group in the book. Chapter 1 begins with a list of fourteen major companies and the background that all of the CEOs or CFOs share, and it was their membership in The Church of Jesus Christ of Latter-day Saints. From my perspective, the authors did a careful and unbiased job of representing my religious culture. I told them so after my appearance with them on the show, and they told me that one of their research assistants for the book, an Asian American woman, was a Mormon as well. They asked her to help them find some Mormons to help work on the book, as they wanted their information and research to be accurate and well represented, and she said something like, “I’m also Mormon.” They thought it was serendipitous and funny.

I was pleased to see a chapter on the “underside” of the triple package. It isn’t always a good thing to be raised with these traits, as I pointed out on the show and as I’ve written about here on my blog. For me, the underside has been personal. For others, it can be ethical. “At the extreme, the longing to rise can become desperate or monomaniacal, oblivious to law, ethics, or the harm caused to others” (p. 165). It can leave one with “a sense of not having lived your own life—of having spent your whole life striving for goals you didn’t even want” (p. 16). The triple package is ultimately about “not feeling good about yourself—or not feeling good enough” (emphasis in original, p. 151). A person with these traits might achieve a lot or become successful, but they may not be happy, fulfilled, content, or able to enjoy those achievements.

Overall, the authors promote these traits as a way for others (everybody of any background included) to achieve success. The book seems to be an effort to reveal the “secrets” of success. They tend to criticize current American values of self-esteem and individualism. Although they recognize the complex nature of a triple package, and of claiming that only certain groups may or may not possess it, they ultimately argue for it. They do not see anything wrong with working hard and achieving much. Neither do I, but I disagree with a type of parenting that belittles children and strips them of identity. While we might disagree on that, although Chua ultimately learned from her own children that her parenting style may have been too harsh, we can agree on this: “There is something deeply fulfilling, even thrilling, in doing almost anything difficult extremely well” (p. 224).

23 thoughts on “Superiority, Insecurity, and Impulse Control: The Triple Package”