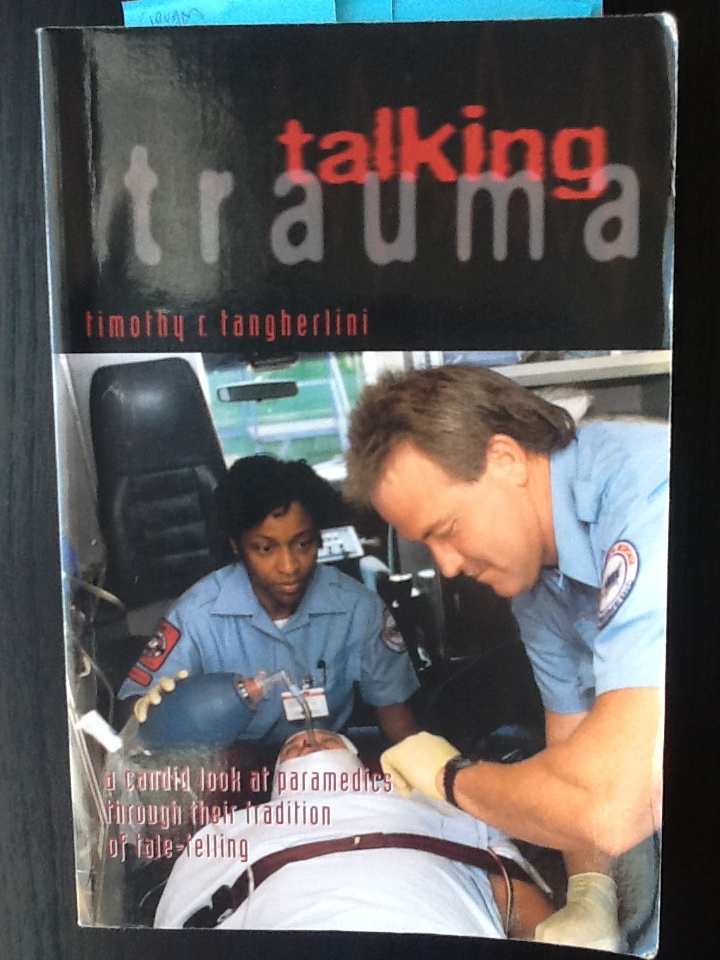 What would you do if your job included finding brains splattered along the freeway, having people chase you with knives, and dealing with blood, brains, and severed limbs?  You’d tell stories about it with your coworkers.  That’s what you’d do.

Talking Trauma (1998) by Timothy Tangherlini is folklore research on the people who face this reality: paramedics in Alameda County, California.  While I read this book for a class assignment last semester, I enjoyed it and I think many of you would, too.  I fact, I plan on loaning this one to my friend Cyndi because she’s a 911 dispatcher and she tells the same sorts of stories.

That’s what this book is: a set of stories with some analysis.  Tangherlini spent a year or so riding around in ambulances with the paramedics to collect their stories, which many of them tell during down times as a way to include newcomers, deal with the stress of the job, and give a narrative structure to unresolved experiences.  Each chapter deals with a different storytelling theme, so I’ll outline them for you today.

The first chapter focuses on the paramedics’ training, and how they often feel upset or marginalized when faced with popular media depictions of their work and skills.  They hate to watch television shows about paramedics because they aren’t accurate, and such shows then put expectations on the people they help for quick action or miracles.  The paramedics don’t generally run full speed into a scene, and they are human beings, not necessarily capable of running up five flights of stairs with heavy equipment without breaking a sweat.  Sometimes popular and romantic notions of their work lead to conflicts in real life.

The second chapter is about the strange and dangerous places they must enter in order to do their job.  The paramedics from this study are based in Oakland, California, where there a many shootings, drug deals, and other problems.  The author calls this area the murder capital of the world.  The paramedics face many calls and situations that a small-town paramedic wouldn’t because of the violence and racial tensions in that area.  Geography is an important factor in any profession in dictating and shaping the type of situations a worker might encounter, especially a paramedic or police officer.

When I read this book, I was reminded of my father, who was a police officer in San Jose, California, for some thirty years.  The places, circumstances, and people in the book are familiar to me through my dad’s eyes.  The way my dad often tells stories of his work is through humor, and many of his stories aren’t true.  He tells them ridiculously to avoid having to tell us the real nitty and gritty stuff.  The paramedics similarly use humor to highlight frustrations and to deal with difficult patients.

In addition, the situations are also difficult in many ways because of human suffering, gore, work pressures, and much more.  Humor seems to be the common strand in the stories as a mechanism for coping with the stresses of the job.  I saw this with my dad.  He often made jokes about the types of people he came in contact with.  He used humor to deflect attention from himself as a hero, similar to the paramedics.  For example, my dad has a scar on his abdomen from an appendix operation.  When I was little, I would ask him about it and he’d jokingly say that he was shot in the line of duty.  Well, for years I believed him.  I had no idea he was joking.  He also has a deformed thumb nail from slamming it in a car door in high school.  When I asked him about that, he told me that he got in a knife fight with 20 guys.  He was able to fight off 19 of them with judo, but the last one sliced his thumbnail with a knife and then ran away.  His stories are ridiculous, but it comes down to him really not wanting to talk about his job and the actual stresses and horrors.

This was common among the paramedics as well.  They displayed a hesitancy to tell their stories to nonmedics, especially those wanting to know the gruesome and gross details.  They “criticize the voyeuristic tendencies of the nonmedic” (p. 160).  In addition, they make up stories to punk those people and to get them off their backs.  Whenever I asked my dad to tell me stories about his police work, he would shake his head and say, “I don’t know what to tell.  I don’t have any stories.”  Most of the stories I know about my dad are secondhand.  Once he jumped over a fence chasing a suspect and got caught on the fence and ripped his pants open.  His first call was to stop two men fighting with axes.

One time he did talk about these stories.  One summer, we rented a beach house at Aptos Bay and some of his friends were there for an evening.  That night, when they thought us kids were asleep, they stayed up late talking and telling their stories.  I listened attentively, for this was the real, gritty stuff I wanted to hear.  I also felt a little left out that my dad wouldn’t tell me the stories or talk this way around me, but I realize now that I am not a part of his group.  I don’t share his folklore, and he will probably never share his stories with me in that manner.  Talking Trauma helped me to understand why.

I also saw a connection to my dad in the paramedics’ disdain of popular television shows.  Of course the depictions aren’t realistic, but even I fall for the heroic procedures and Superman-like swiftness shown in them.  I’ve always enjoyed Law and Order and other police procedurals, but each time I try to ask my dad about them to see if he has seen them, he says no and explains that he doesn’t like police shows because they are unrealistic.  He knows the reality of that kind of work, and it doesn’t fit the dramatic depictions.  Additionally, it bothers him that people expect the police to behave a certain way or work as quickly and efficiently as they seem to on television.  The paramedics had the same reaction, which sometimes affected their jobs and the ability to perform them.

Other parts of this book focus more on the gruesome or upsetting aspects.  Chapter three is about the body parts and brains that the paramedics have encountered.  What struck me about these stories is their gruesomeness juxtaposed with the lighthearted and humorous manner in which they are told.  There is a lot of dark humor, but it seems to serve as a coping mechanism or a way to debrief after witnessing horrific high-speed car crashes.  Additionally, the situations involving these body parts can be humorous.  One set of paramedics rushed a patient to the hospital, only to realize they had left the severed leg behind.  This is a big breach of ethics and procedure, but it was funny to them as well.

Chapter four is about the weird things that paramedics encounter.  Sexuality is part of this chapter, and the paramedics recount some of the compromising situations they’ve found people in who also happen to need medical assistance.  It is quite the spectacle for these paramedics, and they don’t hesitate to talk and laugh about it.

The next part, chapter five, focuses on suicides and mental illness.  Some of the stories are heartbreaking while others are funny.  The author analyzes these stories by pointing out that mental illness is still not considered to be as serious a condition as other medical conditions, and that patients suffering from these problems are often marginalized in American culture.  The paramedics aren’t totally compassionate with these people, in one case teasing a man with an oxygen mask by telling him that it was poison gas.  They put others under “medical arrest” to make them get in the ambulance and get the help they need.

Sometimes the patients don’t need help.  Paramedics have arrived to find people with paper cuts or other minor problems.  In one case, the woman became irate when they told her to put a Band-Aid on it; she pulled out a gun.  Being a paramedic can be dangerous.

Chapter six focuses on babies and children.  The paramedics have a soft spot for children and seem to have a more serious tone when it comes to helping these patients who a often helpless.  However, they will deny ever being heroic and make fun of their coworkers who tell a story as if they were the hero.  The culture of paramedics is enforced through storytelling in this way.

Chapter seven is about paramedics’ annoyance with nonmedics asking them “stupid” questions, like “what is the grossest thing you’ve ever seen?”  They often respond to this question by making something up and upsetting the person who asked.  They also hesitate to share their stories with outsiders because the stories function as a way of community building and sharing, not sensationalism or performance for others.  They certainly perform for other medics, but it serves more of a purpose than just storytelling.

The last chapter focuses on management and the sometimes strained relationship with supervisors who have no field experience.  Sometimes paramedics have conflicts with doctors as well, either because of pride or sometimes jargon issues.

I enjoyed this book because it was funny and entertaining and fascinating.  It was kind of like being a spectator and indulging in that “public fascination with stories about violent and traumatic death” (p. 161).  Overall, this is a captivating study of the stories that paramedics tell and the function of those stories.  If you are a nonmedic and interested in being a voyeur, despite their dislike of that, this is the book for you.  Additionally, there is interesting insight into this work culture and the way that stories and folklore function in communities of practice.

30 thoughts on “Talking Trauma: Paramedics and Their Stories”