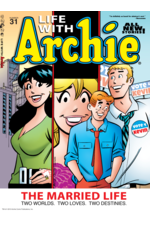 I read a Life with Archie comic book for today’s post.  I’d never read one before.  In fact, I’ve read very few comic books in my lifetime, so it was an interesting experience for me.  I had to adjust to the flow of it.  As I read, I was thinking about the following questions for my class assignment.

What messages/themes about girlhood are communicated?

Who is the intended audience?

Is this a realistic portrayal, or exaggerated?  How so?  With what potential consequences?

Both of the story lines explored the idea that Archie is upset because neither girl relies on him.  In the Veronica story, she is facing some legal trouble after being framed, and she runs to her rich daddy for help.  She spends most of the storyline with her father and his lawyer, trying to solve those problems.

However, she is positioned as helpless, as the problems must be handled by the men with the money and the power.  A senator-elect attempts to defend her, saying, “I’ve known Veronica since high school . . . She’s incapable of the things she’s been charged with” (p. 6).  That is definitely loaded language, meant to be a defense of her innocence, but instead sending the message that girls are incapable of business deals, for which she ran into trouble.  To solve these problems, Veronica must seek the help of her father.  In these scenes, she says, “Love you, Daddy!” while the men do all of the legal talking.

While this plays out, Archie is upset that she hasn’t turned to him, as her husband.  He tells a friend, “She’s not just his daughter anymore . . . She’s also my wife!” (p. 15).  His friend advises him to remind her of this.

In these interactions, I see the message that womanhood (or girlhood) must be mediated by men.  Veronica must be defined by her relationship to her father and her husband, rather than being defined as a person who is capable of handling her own problems.  This storyline ends with Veronica telling Archie, “I’m so scared!” (p. 20).

In the Betty story, Archie is a guy who stays at home while Betty works.  He’s bored and upset that she is never home.  He says, “I know my wife can get overfocused on a task, but she’s gone completely over the top here” (emphasis in original, p. 6).  He then worries about Betty not having time for him and he bristles at their to-do lists, hers with meetings and work-related tasks while his has household chores.  Archie says, “She never does any chores anymore” (emphasis in original, p. 17).

This storyline inverts traditional gender roles, but we learn that this is unacceptable because in the end, Archie is influenced by another woman.  She snatches him up when she sees him alone at a movie and they go off together to get coffee.  The message in this is that if women are successful in their careers, they will be sorry for neglecting their men.  Archie says, “She doesn’t need me” (p. 18).  We learn that a man will go and find attention from a woman elsewhere.  It functions as a warning story for women who are ambitious.

From these messages, I would say that the intended audience is men.  Most of the characters are men, and the women seem to be positioned as helpless or as wrong if they aren’t helpless.  Archie is the focus of both story lines, and we see both women through his eyes.  Additionally, the subplots focus on men speaking to each other about their concerns, while hoping that cheerleaders will show up or that they can influence the women in their lives.

A feminist element is the fact that Betty works and is successful at it, but ultimately the narrative fails to promote an independent and choice-driven woman, as the consequence for her success is a smashed wedding picture in her office and her husband going off with another woman at the end of the book.

The portrayals are exaggerated, especially the physical features of the women.  All of the women in the comic have large chests, which serves to objectify them and reinforce the narratives that place women as secondary to and in service of men.  Veronica is especially part of this physical exaggeration, and she enacts it by keeping busy while her husband Reggie works in the second story line.  She is the “good” wife who doesn’t mind her husband’s success.

I think the consequences of these portrayals are the limiting of identities for both women and men.  I know a lot of men who stay home with children while their wives work and who do an excellent job of it.  I also know men who support their wives in working, or who are more involved with childcare and household chores than this comic portrays.  While I pointed out the problems with the portrayal of Betty as a working woman, I think the fact that she’s always at work is a problematic stereotype for both genders.  It isn’t healthy for men to work all of the time and to neglect their wives either.  This can go both ways, yet it isn’t clear in the comic.  It applies to one gender in the comic and punishes the other for enacting what Archie thinks he should be doing instead of her.  He admits to being jealous that Betty got the job when he didn’t.  The consequences of this are placing competition and jealousy between genders, instead of showing ways that men and women can support each other, especially when married.

29 thoughts on “Girls’ Studies: Mediated Girlhood in an Archie Comic”