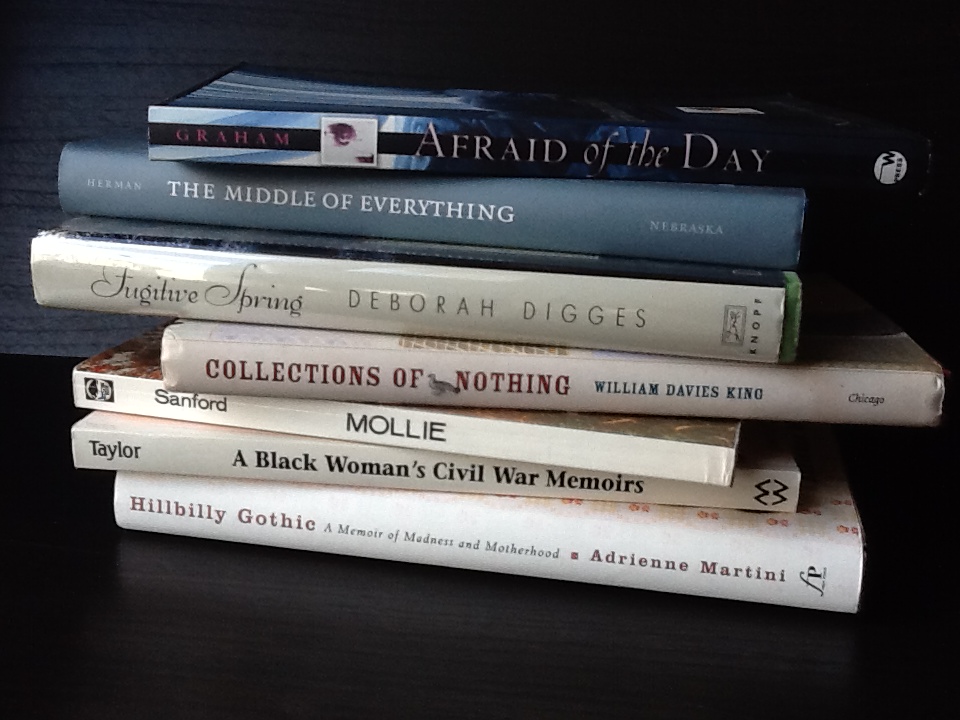 A few weeks ago, I walked into the copy/mail room of the English department at my university and saw a box full of books advertised as “free.”  Of course, I couldn’t resist pawing through them, and even though my backpack was plenty full of textbooks, I ended up hauling seven of them home.  Here they are.

Afraid of the Day: A Daughter’s Journey (2003) by Nancy Graham is a memoir of a daughter watching her mother go through depression.  It sounds, well, depressing, but also pretty fascinating.

The Middle of Everything: Memoirs of Motherhood (2005) by Michelle Herman sounds interesting to me because of my interest in motherhood studies academically and my research on women and mothering as “professional.”

Fugitive Spring: A Memoir (1992) by Deborah Digges is about growing up in the Midwest in a large family.  She ends up in California in the 1960s.  That’s enough to catch my attention.

Collections of Nothing (2008) by William Davies King is a memoir about the author’s obsession with collecting.  It seems like a literary-esque version of that train wreck of a television show Hoarders.

Mollie: The Journal of Mollie Dorsey Sanford in Nebraska and Colorado Territories 1857-1866 (1959) sounds like a keeper based on the title alone.  I’m thinking Angle of Repose by Wallace Stegner meets Willa Cather’s My Antonia and O Pioneers! with a touch of Laura Ingalls Wilder.  Just think how disappointed I’m going to be if this isn’t the case.

Reminiscences of My Life: A Black Woman’s Civil War Memoirs (1902) by Susie King Taylor sounds even more exciting than the previous book.  I suspect this will give me a more realistic view of the civil war than Gone with the Wind or Uncle Tom’s Cabin did.  It might also make a nice companion to Narrative of the Life of Frederick Douglass, an American Slave.

Hillbilly Gothic: A Memoir of Madness and Motherhood (2006) by Adrienne Martini looks like it will inform my research interests as well.  Even better, it might inform my life as a mother who constantly uses euphemisms for madness to describe her state of mind!

Now, all of these books are memoirs of some sort, and yes, I’m interested in memoirs and picked those from the box on purpose.  But the fact that the box had so many memoirs in it tells me that a professor in the department likely went through a memoir stage or taught some sort of class on autobiography and found these useful or used them as texts.  Hopefully, offering them for free in the department copy room isn’t a reflection of their worth as readable and enjoyable.

Have you read any of these?  What can I expect?