I love Dracula (1897), number 72 on the BBC book list, by Bram Stoker.  It is one of my favorite books, and I have read it several times.  And I would read it again.  One of my favorite memories of these many readings is when I read it with my neighborhood book club in October.  It is the perfect month for such a read.  I am not sure exactly what I love about the novel, but I do love it. 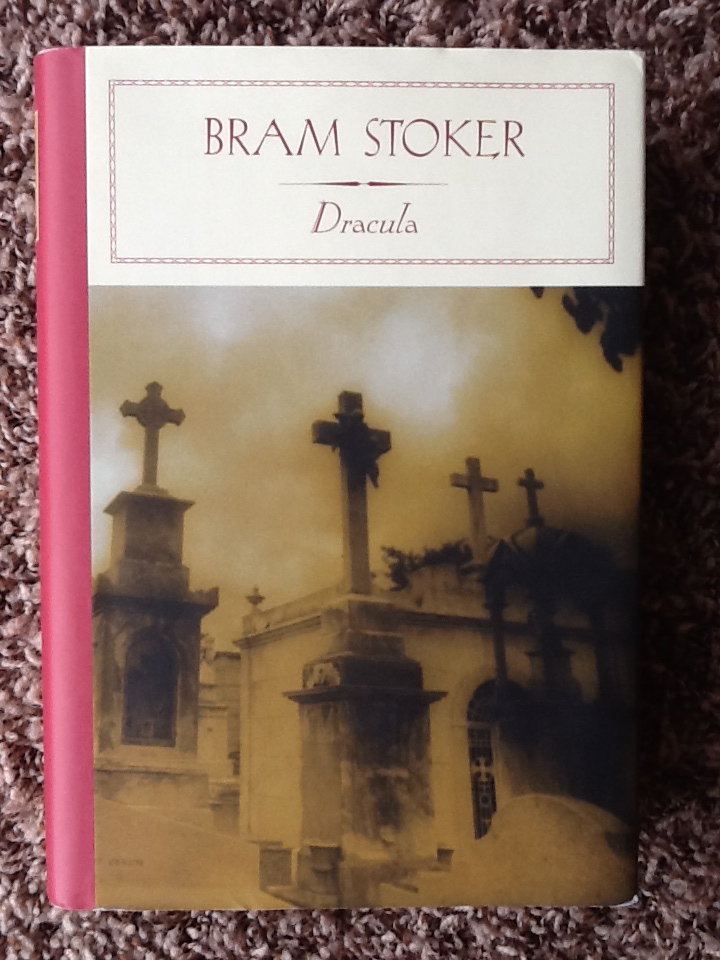 It begins with Jonathan Harker visiting the count’s castle.  He does not realize the danger he is potentially in, but he unwittingly arranges for Count Dracula to travel to England.  There, the count wreaks havoc, attacking women and appealing to insane inmate Renfield’s connection to him.

I have heard several interpretations of the novel, which I am not going to research in detail for this post.  So if I get it wrong, please forgive me.  I have heard that there is some sexual innuendo in Dracula’s biting, particularly the women he preys on.  This is often interpreted as a metaphor for sex. This idea has certainly been taken to a new level with Stephenie Meyer’s Twilight series.  Not only does she create “good” vampires, but she makes them marriageable and so good in bed, that they break it.  I think her use of sexual tension in the novels is quite brilliant, especially given the origins of vampire stories and the implied sexuality in Dracula.

In addition, I have heard that the novel reflects a sense of xenophobia at the time, when immigrants were coming to the country and “taking over.”  In some ways, this is a theme of any generation.  We all tend to shy away from those who are different, whether that be culturally or racially (or in any other way).  Dracula has applications in our own time.  I see both of these themes, xenophobia and sexuality, as valid interpretations of the novel, but I honestly just enjoy the suspense of the story.

This suspense is achieved through our knowledge of Dracula’s true identity and character, while his victims do not realize the threat he poses to them.  They are in danger but don’t know enough to escape it or prevent it.  That is the perfect recipe for suspense, because we know what might be coming, but the victims do not.  I always want to warn them or yell at the book, but it never does any good.

Mina may be my favorite character, and I love (in a funny way) what Professor Van Helsing says about her: “Ah, that wonderful Madam Mina!  She has a man’s brain—a brain that a man should have were he much gifted—and woman’s heart.  The good God fashioned her for a purpose, believe me, when He made that so good combination” (p. 251).  It is a strange way to give a compliment, but certainly a product of the time.  I’d like to think that Mina has a woman’s brain, one that a man would be jealous of even if he were much gifted!

Renfield is an interesting and terrifying character.  He is in a mental institution and keeps flies as pets.  Then he eats them.  He also eats spiders and birds, and wants a cat, but can’t have one.  He’s pretty much the old lady who swallowed a fly.  As his behavior grows increasingly strange, we realize that he is under the vampire’s spell, and that when Dracula is in the country and prowling about, Renfield acts as a thermometer of this danger.

The format of the book is also appealing.  It takes the form of a diary, and includes letters pasted into that diary and other character’s diaries and musings as well.  It makes the first-person narrative believable and interesting.

I have also enjoyed the spinoff of Dracula called The Historian (2005) by Elizabeth Kostova.  It is a large book that seems short because of the excitement and suspense.  Basically, it is popular fiction at its best.  Kostova brings the Dracula story into the current day and creates characters who chase him all over Europe in order to put an end to his reign of terror.  The novel explores the historical and folkloric stories of Dracula, or Vlad the Impaler, and has the power to make one believe that Dracula is really running rampant over Europe and that the characters must actually save the world.  The characters have done the research and have the knowledge necessary to stop him.  It is a gripping tale and promotes the idea that knowledge is power and can overcome great evil.  I like that.  Just a little research can change the world!

Have you read Dracula?  Do you have better insights on it than I do?  Please share!

72 thoughts on “The One True Vampire Novel”