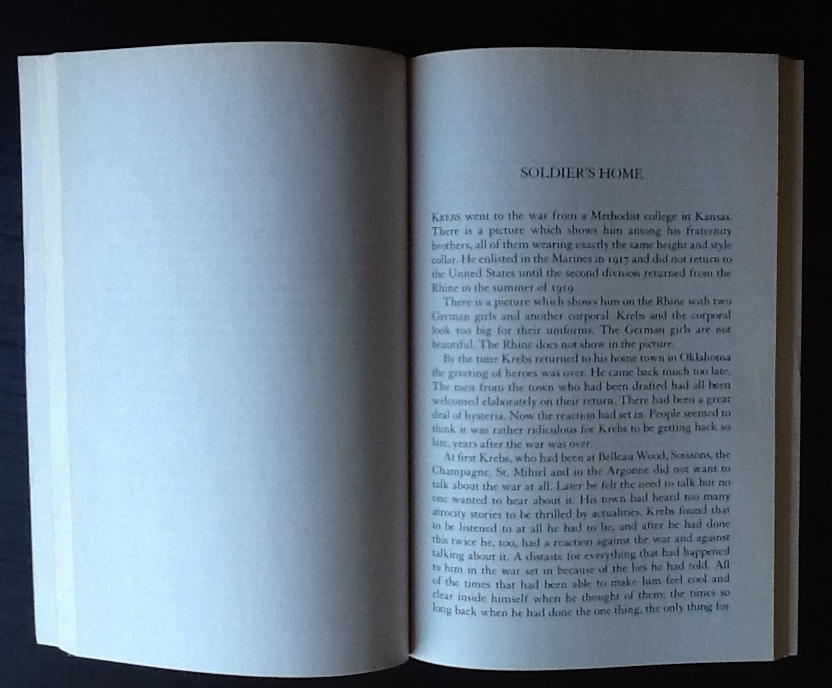 I’ve read a few different short story collections by Ernest Hemingway.  Here are my musings on some of the specific stories in those collections. 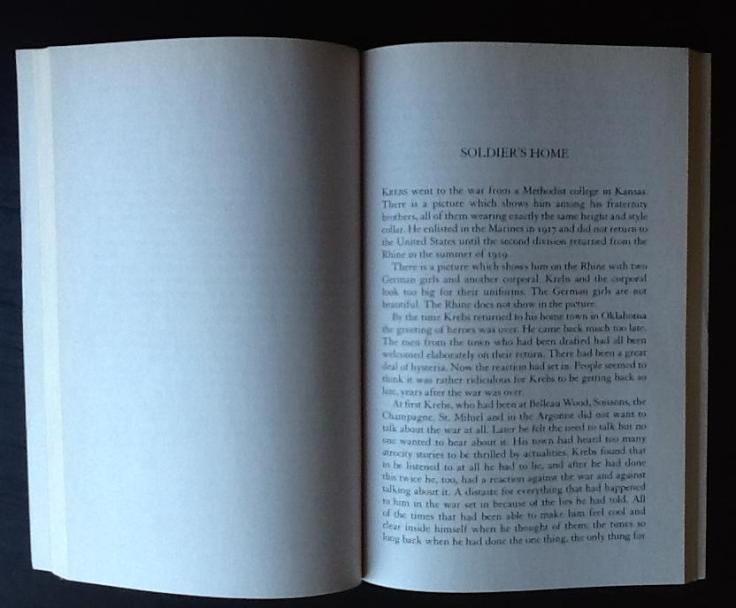 “Soldier’s Home,” from the collection In Our Time (1925), is a product of Modernism, a literary and social movement surrounding World War I in which the world experienced dramatic change.  Harold Krebs returns from war and is ignored and unable to assimilate.  Krebs represents the modern man damaged by war because of his disillusionment, his fragmentation, and his loss of faith.

Krebs’s disillusion begins upon arriving home a few years late, and he finds that there is no celebration.  He is also anxious to talk about his war experiences, but “no one wanted to hear about it” (90).  In addition, Krebs is an outsider.  He spends time looking at girls, but he does not join them.  Although he finds himself attracted to the girls, he is also repelled by them.  He understands that others are settling down and having families, but he does not want to do the work.  “He wanted to live along without consequences” (93).  He understands that participating in a world that he does not belong to would bring consequences.  He has no desire to join this world or to go back to the young, carefree man he likely used to be.

Self-fragmentation occurs when Krebs lies about his war experiences.  Because of this, he finds that he no longer appreciates the actual experiences he had during the war.  He is torn between his identity as a soldier and what others expect him to be.  He must misrepresent himself to gain attention, but when he talks with other soldiers, he “fell into the easy pose of the old soldier among other soldiers: that he had been badly, sickeningly frightened all the time” (91).  He realizes that war has no glory and that he has no identity.  He is torn between lying about his war experiences and facing the actual terror and unease of war.

In addition to the disillusion and self-fragmentation that Krebs experiences, he also shows a loss of faith.  When his mother talks to him about dating and working, he demonstrates this loss.  He goes through the motions of kneeling to pray with her, but when she asks him to pray, he says, “I can’t” (101).  The war has damaged him, and he feels as if he cannot pray, but not that he won’t.  Once this scene plays out, there seems to be hope, as Krebs decides he will get a job and try to live the way everyone else is.

Warning: This next section has a lot to do with sex. There’s nothing explicit, but if such subject matter would bother you, please skip to the last paragraph.

Sexual imagery is frequent in Hemingway’s writing, revealing his attitude toward male-female relationships.  Sex is often equated with death in the collection The Snows of Kilimanjaro and Other Stories (1961).  This metaphor represents the attitude that women are the destroyers and emasculators of men through sexual control.

In “Fathers and Sons,” Nick learns at a young age that sex equals death.  He remembers the two things his father taught him about sex, a subject on which he calls his father “unsound” (56).  In this story, it unclear why Nick would believe this of his father, yet if we connect this story to “The Doctor and the Doctor’s Wife,” we understand that Nick’s father is dominated by his mother.  His father’s rifle becomes a phallic symbol, one whose shells do not get spent.  This helps us understand as readers why Nick’s father’s advice on sex is not considered sound.  About buggers and mashers, his father said they are both “the most heinous of crimes” (57).  “His father had summed up the whole matter by stating that masturbation produced blindness, insanity, and death, while a man who sent with prostitutes would contract hideous venereal diseases” (57).  The message of death as a consequence of sex is clear.  Whether or not the act is performed by oneself or with a woman, death or deadly disease will occur.  In Nick’s father’s experience, a woman is responsible for his own sexual death.

Although the source is considered unsound, the advice his father gives seems to correlate with Nick’s own sexual experience.  He recalls childhood sexual experiences with the Native American girl, Trudy.  After sleeping with her, “[s]omething inside Nick had gone a long way away” (61).  This line seems to refer to death again.  His experience with Trudy is not enjoyable because she hopes to become pregnant, a form of control, and he leaves as soon as he can.  When she tries to convince him to stay, he refuses and speaks to her in one- or two-syllable words.  The relationship is not equal or happy.  Trudy seems to be trying to control him, symbolic of that unhappy relationship in which women emasculate men.

In addition, a threatened sexual act is met with the threat of death.  Nick threatens to kill Trudy’s brother if he tries to sleep with Dorothy, Nick’s sister.  Although Nick is the one threatening violence, the possible sex with Dorothy is what would put the brother in harm’s way.  Sex with Dorothy would result in death, another image of the way women are capable of destroying men.

Nick’s father’s death is the reason Nick reflects on the sexual advice he had been given.  This makes the entire story an overarching connection between sex and death.  Nick’s son repeatedly mentions “the tomb of my grandfather” (64).   The death of Nick’s father is connected to his father’s sexual advice, again showing that sexual relationships with women are destructive.

Many of the other stories in the collection also use imagery that equates sex with death.  The metaphor seems to represent the male-female relationship as one in which women dominate, control, and ultimately destroy men through sexual control.  We can see how this connects to Hemingway’s bitch goddesses that I mentioned earlier this week.

One of the stories that has always intrigued me, but is not in these collections, is “Hills Like White Elephants.”  I remember it being one of my first experiences with Hemingway, besides The Old Man and the Sea, and I was confused.  It has his characteristic stark and simple style.  The prose isn’t flowery or descriptive.  Only the bare minimum is there.  I read it as a college freshman.  I didn’t understand it at all.  Then I went to class and learned that the couple in the story had been talking about abortion the entire time.  Yeah, that went right over my head.  I wonder what I’d think now if I reread it.  It would probably make a lot more sense.

Overall, Hemingway’s short stories explore the most important and controversial aspects of human life.  He writes many of them through the eyes of his alter-ego, Nick Adams.  The Nick Adams stories are frequent and famous.  They are also representative of the male experience of growing up.  I also see Hemingway’s war pieces as important.  He explored the pain and suffering and confusion that a soldier feels in war and in coming home.  I’m sure these stories would find pertinence now among those who have served overseas.

Join 37,632 other followers
Follow The Bookshelf of Emily J. on WordPress.com

I finished these short stories by Hilma Wolitzer. The title story, “Today a Woman Went Mad in the Supermarket,” was too familiar. I remember one winter, feeling like a zombie with depression, I went to the grocery store and was barely holding it together. My face and posture tipped off the man behind the bakery counter. He came over to me and said gently, “It’s going to be okay. You will be all right.” I’ll never forget that. I needed to hear it, and his care felt good.
The library in the Rijksmuseum is magical. 😍