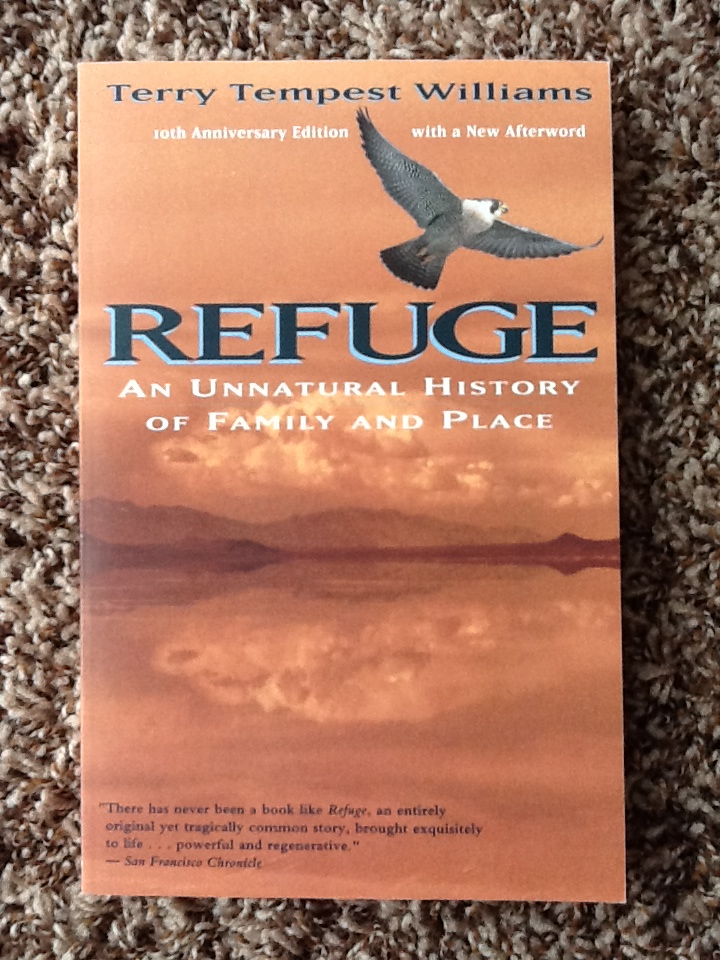 I can almost always see seagulls flying overhead.  They fly over my house, sometimes so high that I can barely tell they are birds.  They look like luminous white balloons tossed in tandem through the wind.  A few weeks ago, after finishing Refuge: An Unnatural History of Family and Place (1991) by Terry Tempest Williams, I spent more time looking at these birds and appreciating their beauty.  I laid on my back and just watched their flights.  My three-year-old came over and said, “Mom, are you okay?”  I reassured her that I was.

Tempest’s family, however, was not okay.  Her book recounts her love of birds and wildlife and the landscape surrounding Great Salt Lake, which sits just east of my home.  Her book also recounts the death of her mother and later her grandmother of breast cancer.  The book is a tribute to these women, to the land, and to birds.  It is also an indictment of the way we treat the land and how that treatment resulted in the rampant breast cancer in her family.  They are downwinders, and Williams’s mother, grandmother, great grandmother and many other women in the family are affectionately referred to as a clan of one-breasted women.

Williams comes to term with her mother’s cancer through the landscape.  Her mother taught her to love the land, and her grandmother taught her to love birds.  She combines her bird-watching with the story of her mother’s cancer.  Diane, her mother, was first diagnosed at thirty-six with breast cancer. She fought it and lived many more years, then found a lump in her stomach.  She again fought this tumor, but it kept coming back and eventually killed her.

I was struck by how Williams describes the experience as spiritual.  She likens her mother’s death to a birth of sorts, and in being with her in those final moments, days, and hours, Williams sees herself as her mother’s midwife.  Her mother also handles it bravely, at times becoming distant and sulky, but at other times realizing that solitude is a blessing and that each day is a gift.  It is a phrase we all hear, that we must live as if we are dying or live for the present.  However, Diane explains to her daughter that she did not understand this or have the capacity to do it until she was actually dying.  She knew the end was coming, but lived in the moment and tried to make each day full.

One of the most touching ways Diane did this was by sending a book and a heartfelt letter to a neighbor who was also dying of cancer.  The woman was younger than she, and had young children.  The letter shares some of what Diane felt she learned the first time battling cancer.  As the vignettes through Williams’s eyes continue, I forgot about this young mother, Tamra.  Then, a vignette appears, saying that they had attended Tamra’s funeral.  It caught me off guard and I cried for that young mother, long dead and gone.  But I felt I was reliving this unnatural history that Williams shares thorough her narrative.

Williams is a scholar who worked at the state’s natural history museum, the new version of which I recently visited with my children in Salt Lake City.  Williams shares insights and quotes from her profession and experiences.  My favorite was the line from an Emily Dickinson poem, that “Pain prepares us for peace.”

I’ve only ever known a few people close to me who have died, including Brother Checketts, as I mentioned in my last post.  But I’ve never been the midwife to somebody’s birth into death.  I’ve never faced such personal loss, but I have felt pain.  I have lost my mother due to mistreatment, broken relationships, hate, and anger.  I’ve felt that loss, grief, and pain.  I’ve also felt peace.  I am still at peace, although my loss is irreparable and unsolvable.  Peace is real, but I now know that I could not know that peace without having experienced years of seemingly endless and irreparable pain.

There are also themes of the power of the landscape.  The narrative is told during the mid-1980s, when Great Salt Lake was rising and threatening homes and the bird refuge near Brigham City that Williams loves to visit.  She sees irony in the attempts to control the lake, by pumping water away and passing laws against its rising above a certain level.  The money spent is somewhat ridiculous.

Her account of this time, a time when I did not live in Utah, made me grateful for knowing about this natural history.  I realized that I drive along the shores of the Great Salt Lake every day, and twice a week, I drive all the way up its eastern edge on my way to school.  I drive through Brigham City, past the Bear River Migratory Bird Refuge, and then veer away from the shores of the Great Lake and through the canyon to my school.  I am connected to the lake, without even realizing it.  And a few weeks ago, as I gazed at the seagulls flying high over my home, I felt more connected than I had in a while.

I am a fan of Williams’s work.  This is the second book of hers that I’ve read.  The first was When Women Were Birds.  I received this book, Refuge, from my sister and brother-in-law for Christmas.  They are more outdoorsy naturalists than I am, and this book reflects much of their lifestyle, but they knew I would love it.  And I do.

31 thoughts on “I Noticed Seagulls: Birds and Breast Cancer”