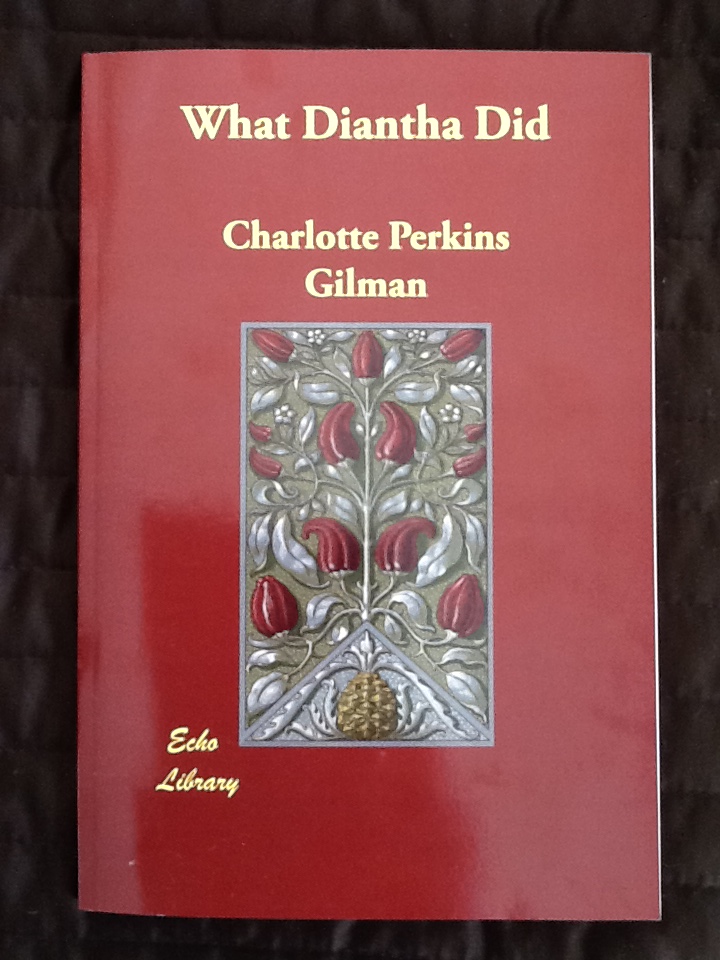 I have an amazing colleague named Diantha.  She is a Master’s student at my university and a former elementary school teacher, and because some of my PhD classes are cross listed, I get to have classes with her.  We took a rhetorical theory class together last semester, and this semester she was in my technology and culture seminar.

She knows I am into feminism (who doesn’t?) and consequently brought me a book.  It is What Diantha Did (1909-10) by Charlotte Perkins Gilman, famous for her short story “The Yellow Wallpaper,” a frightening story of confinement after childbirth that highlights insensitivity to women’s issues, both mental and physical, in the late 1800s and early 1900s.  That story is autobiographical.

It was nice of my friend Diantha to lend me her namesake book!  In What Diantha Did, there is no clawing at seemingly alive yellow wallpaper, but there is feminism.  Diantha is a young lady engaged to be married, but her fiancé must help his mother and many sisters financially before he can save enough money to start married life.  Diantha does the only sensible thing she can think to do.  She goes to work to earn money faster.

Her family disapproves, so she presents the plan to her father in numbers.  She calculates the cost of her living with her family minus what they should be paying her for all of the work she does.  She uses fair market values to make her calculations, and in presenting the information, offends her father beyond words.  In addition, her family members are confused and somewhat disgraced by her going into domestic service.  (I am learning more and more that, historically, when a wife “worked,” it was because of financial problems or the inability of the husband.  It is seen as a sign of weakness or poverty.  See the research of Ruth Schwartz Cowan for more about this.)

Diantha does not let her family deter her and she heads out into the world.  Of course, she becomes wildly successful, eventually turning her work ethic and system into a business and from there into a utopian communal society where all of the women pool their resources for childcare and housework.  It is a dream of the late 1800s and early 1900s, a la Bronson Alcott and the transcendentalists or, yes, even the early Mormon settlers of the Salt Lake Valley.  Such communal living arrangements are scorned and scoffed at, even called communist.  I guess that is the root of the word, but on paper, communal living should be harmonious and desirable.  But historically we Americans have rejected such ideas and communities as radical and subversive.  We prize individualism more, me included.

So Diantha’s venture succeeds, but not without resistance and opposition along the way.  But in the end, it turns out happily.  There are some bumps in getting to marry her man, but he comes around and realizes that she is admirable and worthwhile.  This part of the story, that her fiancé is angry at first and prideful and refuses to marry her, although her financial success is what makes their marriage possible, is somewhat maddening.  But his reaction is realistic.  It is such a pity that for him to come around requires his traveling abroad and hearing of her accomplishments and their warm reception around the globe.   I guess he finds that her accomplishments are only admirable when large numbers of people are admiring them.

So this novella, although feminist and fun and interesting, is not very well written. The narrative is choppy and confusing at times.  There is not clear story arc or plot.  The conflicts and resolutions happen quickly and without cohesion.  Overall, I do not appreciate Gilman’s prose, but I admire her tenacity, her activism, and her bravery.  Her own life was somewhat fraught, and I can’t say I agree with all of her decisions, but her literature is something I find interesting and enjoyable.

12 thoughts on “A Diantha Book by Charlotte Perkins Gilman”