As I mentioned in my post on The Kite Runner, I took a world literature class while working on a Master’s degree in English.  I was so excited for the class, and my background as an editor of a daily document about the worldwide security situation prepared me for knowing a little bit about the countries of the authors whom I would read.  We also had to create reports about those countries, and because I had already done that in my former job for most of the countries of the world, that report and presentation was delightful and seemingly easy.

We read a selection of short stories from different authors.  I don’t remember the specific titles and I no longer have them.  I think the professor gave us photocopies of them—not necessarily ethical.  But I do have some of the books from the course, and I wanted to highlight them today. 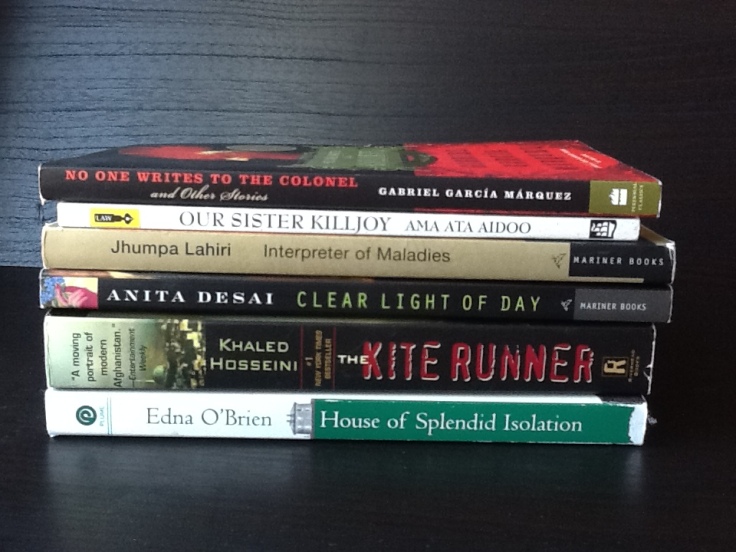 Interpreter of Maladies by Jhumpa Lahiri

The Kite Runner by Khaled Hosseini

These books introduced me to new authors, which I found to be the greatest benefit of having read them.  As I mentioned before, I was already familiar with Hosseini’s The Kite Runner.  I was also familiar with Lahiri.  I have read everything she has written so far, and I wait with anticipation for more.  She’s brilliant and, to me, captures the experience of being an American, an immigrant, and an “other.”

That’s what I really want to write about today, the idea of “othering.”  We all do it.  It’s more comfortable to find similarities with other people and ideas and to reject those that make us uncomfortable or that seem different and therefore scary.  We prefer to identify with the people and objects around us, and when we don’t identify easily, we turn away and retreat.  We make excuses for why those ideas or people aren’t worth our time, when in reality, the truth is that they are just different and we prefer to see them as “other.”

I know there are arguments for why this is reasonable.  Perhaps, you say, there isn’t much literature from these other countries, so we have to group them all together and call it good.  I would say that’s a narrow view of other countries and cultures and simply not true.  Perhaps, you say, that such literature probably isn’t as well written or as good as the Western authors we are accustomed to reading and celebrating.  I would say that it depends on your measure of “good” and that such thinking is a way of engaging in distancing ourselves from that which we perceive to be different.  There are so many reasons to justify our marginalization of “others” but all of it strikes me as wrong.

I guess I’ve been thinking about this for a while in relation to the current work I’m doing on my Ph.D.  In my field’s textbooks, inevitably, toward the end, there’s a section or chapter devoted to “women’s issues” or “multicultural” issues (sometimes both appear in the same chapter).  It is a nod to these groups or “others,” but that separate section automatically treats them as a footnote to what is “really” important in the field.  This tendency makes white, male ideas and contributions central and “normal” while just acknowledging other contributions, cultures, and genders.  These are recognized only in the sense that they are happening, but not that they are in any way “normal” or important or worthy of actual study and inclusion.  It has been bothering me, and many other scholars.  At a conference I attended in Las Vegas a few months ago, several presentations were devoted to this issue, many of them centered around textbooks in the field.

I guess here we could get into the organization of curriculum and genres, and some may ask, “How else will we organize classes or coursework?”  I don’t know.  I simply don’t know how to better organize or title courses and genres of literature.  But there must be some way of being more inclusive and less marginalizing.

This issue is illuminated in one of the books we read for the course, Our Sister Killjoy (1977) by Ama Ata Aidoo.  It is a dark novel that parodies Heart of Darkness (1899) by Joseph Conrad.  It recounts Sissie’s leaving Africa to visit the European continent, and she finds that the people there are objectionable to her.  It is a brilliant novel, one that turns ideas of colonialism, “othering,” and racism on their heads.  I highly recommend it, especially if you were forced to read Heart of Darkness in high school or college.  (It is one of my least favorite books, by the way.  I refer to it as “The Horror, The Horror.”)  I apologize if you are a Heart of Darkness fan.  I just can’t like it.

I’m sure this class and its readings could have been improved upon.  I found that my excitement for taking it waned after the first few weeks, for the literature was stimulating and enjoyable, but it wasn’t enough.  The class discussions were abysmal and dominated by a few loudmouths.  By the end, I couldn’t wait to leave the confines of that classroom and continue to discover great “world” literature on my own.

Looking back, I would add the work of Nigerian author Chimamanda Ngozi Adichie.  I wrote about her novel Half of a Yellow Sun last year on my blog.

What “world literature” have you read?  What would you add to this course’s reading list?

40 thoughts on “World Literature and Othering”

Here’s what I read in September. It isn’t much. I’ve been distracted, and I’m having a hard time focusing. I also revisited a few other books as part of my teaching, which I haven’t included here. I skimmed them to refresh my memory.
I need to remember this. #books #womensfiction #lizkay #reading