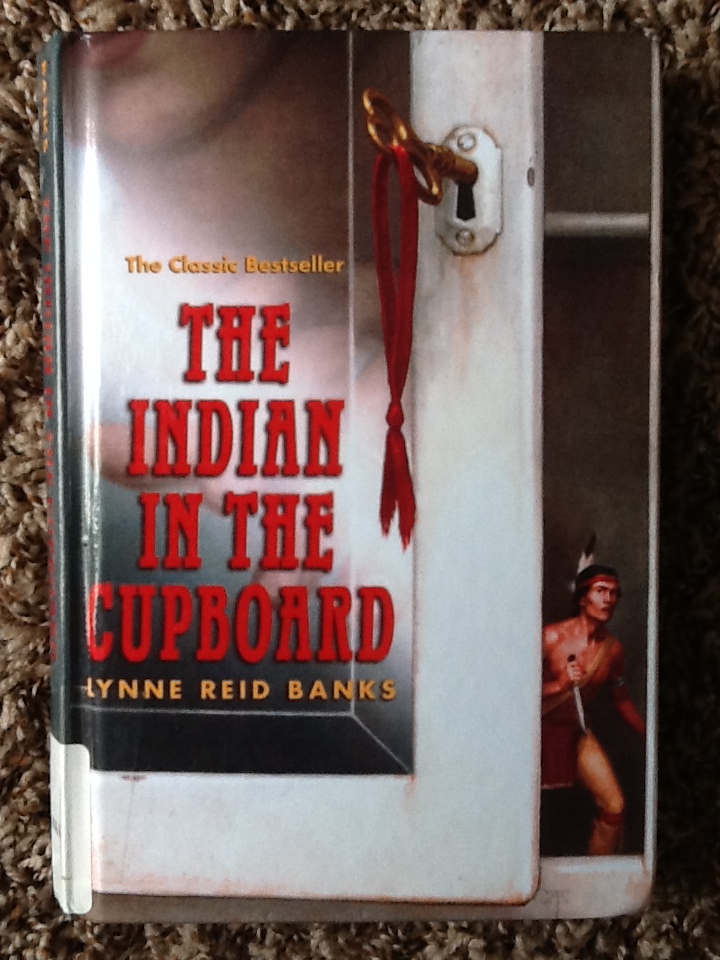 Ah, The Indian in the Cupboard (1980) by Lynne Reid Banks . . . where do I begin?  Do I start with the rampant racism and stereotypes, the taking of the name of “God” in vain (in a children’s book of all places), the anti-feminist overtones, or the pure delight in my daughter’s eyes and imagination as I read to her?

This is a tough book for me to write about.  I loved it as a child, and I remember the magical feeling I got when my mother read of Omri’s discovery that his plastic Indian figurine came to life when he put it in his cupboard and turned the key.  It is every child’s delight to imagine that his or her toys could come to life, or that they could possibly have a life of their own independent of the child’s.  This concept is what the popular Pixar Toy Story movies are based on.  We love those movies at my house.

My daughter loved the story.  She could not wait to see what would happen next, just as Omri could not wait to visit his little live “Indian” after school.  Omri hurries here and there to get things for his Indian, wakes up early to see how he’s doing, and ultimately realizes the value of human life.  Just because something is small and seemingly helpless, does not mean it doesn’t have dignity.

I see this theme as important because of the racial issues, with Omri being, presumably, a white kid in England who discovers the magic of his cupboard.  I also see problems with the way Omri refers to the Indian as “his.”  It reinforces the white man as conqueror story.  Additionally, Omri and his friend Patrick bring a plastic cowboy to life.  “Boo-Hoo” Boone immediately begins using racial slurs and uttering epithets.  I understand that the author was trying to portray authenticity, as her characters were supposed to have come from another time and place through the cupboard, but it rubbed me the wrong way.

I guess that’s because I have lived on two Native American reservations in my young life.  The first was the Navajo reservation.  We lived in a trailer park in a tiny town called Mexican Hat (with a red rock formation of that shape) during one of my elementary school years.  I had come from a white, suburban neighborhood in the Bay Area of California, and it was quite a culture shock for me. I ended up coming home from school early each day for a week or so crying and choking back tears and shame.  I finally confessed to my mother that I felt so bad for the other children that I could not stand to be at school with them.  They made my heart hurt.  They lived without running water and did not have the things that I had.  I had never seen poverty before, and once I got over my overwhelming empathy, I came to love those children.

We later moved to the Ute reservation in northeastern Utah.  I spent ten years there, making friends with kids whose last names were Wissiup, Secakuku, and Foolbear.  I heard their talk, saw their culture, and realized that they were people.  I attended powwows and a regular feature of our local community talent shows and celebrations were Native American princesses dancing in their jangling dresses, dresses that were lovingly crafted with leather, beads, and metal from their grandmothers’ own hands.  My sisters and I often frequented a place called Moqui’s Trading Post, which featured many of the handmade goods from the reservation, including pots, leather belts, and beautiful beaded jewelry.

So although I do not know everything there is to know about Native Americans and their cultures, I know enough to know that they are people and that old stereotypes of “savages” and “brutes” are unacceptable and offensive.  I realize that The Indian in the Cupboard was written a while ago, but as a children’s author, I think Banks had more of a responsibility to depict her character drawn from an Iroquois brave more delicately and humanely.  Maybe she does so as the story ends.  Omri, Boone, and Little Bear certainly learn to love each other.

Well, I was about to get off of my soapbox, when I realized that I need to address the feminist problems in the text.  I didn’t have to explain any of my feminist objections to my daughter, for she objected to them herself without my saying a word.  She lives in a time where these sorts of issues are normal, so to see them depicted so archaically really bothered her sensibilities.

Toward the end, Omri lets Little Bear pick out a plastic figurine of a woman, a Native American woman, to be his wife.  Omri promises to put her in the cupboard and make her real.  When he does so, the woman, of course, has no objections to being Little Bear’s wife and immediately begins cooking and being domestic.

My daughter said, over and over again, “But what if she doesn’t want to marry him?”  I concur.  What if?  I guess that question didn’t stop thousands of years of oppression and men claiming women to be property, up to the late 1800s.  Even then, men still treated women as property by not allowing them to vote in the United States until 1920, when president Wilson finally gave in because of Alice Paul and other suffragettes’ hunger strike that nearly left them dead.  (I recently watched Iron Jawed Angels about this issue if you are interested.  It is shocking and fascinating.)

All of this gave me a chance to have a great talk with my daughter on her feelings as a female and about her autonomy.  I also got a chance to explain why we don’t refer to Native Americans as “savages” and why the book has made some ethnocentric mistakes.  So although I take issue with some of the dated ideas and language, I did find it to be a great way to talk to my daughter about my concerns and about issues that she’s now old enough to process.

Olivia loved the book. She wants to read the sequel together.  I will do it, for her, and because I understand the magic of the story, but I object to the insensitive treatment and depiction of Native Americans in the book.  Perhaps I am raising objections that don’t really matter or perhaps not many other people mind, but I do.  I really do.

24 thoughts on “Ethnocentrism in The Indian in the Cupboard”

I’ve been working on putting myself first, not in a selfish way, but in a way that ensures that I am my first priority. It’s hard. I tend to worry about what other people think and how I can please them. My therapist is helping me to see that I’m important too and that I can be more authentic and therefore more confident in who I am and what I want.
“She was able to see clearly what she then so incoherently felt: how much she needed another human being, somewhere, who knew the truth about her.”