I just got home from an academic conference in Las Vegas.  It was one that I had applied to for presenting, but I did not get in.  I guess the acceptance rate is some 30 percent, so I don’t feel too bad about it.  I was accepted into a research workshop associated with the conference, so I attended that and met some interesting people.  At the conference, I attended presentations by the “big names” in my field.  It was surprising to see how polished (or unpolished) they were in presenting, and to put faces to names.

Although all of this academic talk was interesting and useful to my schooling, I had more fun spending time with my dad.  He met me there, and when I wasn’t in conferences sessions, we ran around Las Vegas seeing the sights and shows.

My dad grew up in Las Vegas, so he took me to his old neighborhood and high school.  It was interesting to see how run down it is now.  As we drove through this area, he told me funny stories of his childhood.  The boys in the neighborhood used to ride their bikes to the strip and ride them through the fountains.  They also pool-hopped.  They would jump in one hotel’s pool, and then when caught and thrown out, they’d make their way to another hotel.   He also told me about how one hotel had a fire in the 1970s that resulted in many deaths and in people falling to their deaths trying to get out.  On a more happy note, he said the old MGM hotel used to show classic movies in a large basement theater for only 50 cents.  Those were the days!

One of the low lights of the trip was our dinner the first night.  We thought that the professors and students from my program were meeting for dinner at the Circus Circus buffet.  Well, it turned out that only one other student and my dad and I showed up.  It had been canceled without our knowledge.  This is what we had to choose from! 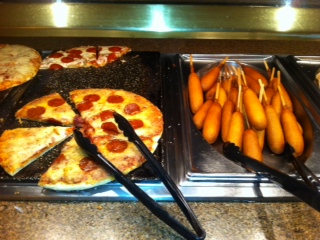 Yuck.  Frozen pizza and corndogs?  Not gourmet.  And definitely not the best Vegas has to offer.

This was the décor of the buffet.

Yeah, we are snobs, but it was fun, especially since we had dinner the next night at Picasso in The Bellagio. It is a five-star restaurant with a dress code and such delicious food.  I’m still craving the salmon, quail-egg, and caviar appetizer along with the most delicious potato leek soup I have ever had.  As we ate this fine cuisine, we watched the extravagant Bellagio fountain.  We talked about water rights and issues, and how Las Vegas means “the meadows.”  However, all of the ground water that was once there in that desert oasis is gone, and instead the water comes from the Colorado River.  The extravagance loses its appeal when you realize how much waste there is and how much hubris goes into creating a giant fountain in the middle of a desert.

The desserts were strange.  Here’s a picture of my dessert. 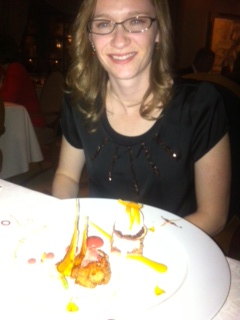 It was some combination of cinnamon bun pieces and tangerine sauce and slices and cream-cheese gelato.  My dad’s was a tea-soaked pear with panna cotta and ginger gelato.

We also went to Mystere, a Cirque du Soleil show.  I had never seen one before, so that was a new experience, and I want to take my family back.  My daughters would love it.  The acrobats are amazing.

The best part of my conference was a section on professional writing and feminism.  I was able to add to the discussion after the presentations and I connected with the presenters.  They are fairly new to feminism in technical communication, so I was able to share my research with them and inform them of some literature that is foundational to the intersection of the two fields.  We exchanged information, and I’m hoping to continue to talk with them and perhaps contribute to a publication or presentation in the future.

The thing I learned most from the conference is this: propose research that will fit into a nice category for a session or create a panel proposal.  There was nothing wrong with my proposal, and I know I would have given a great presentation with the information I have gathered over the last six months.  However, there was no neat place for it to fit into a session with two or three other presenters.  Now I know, and next year, I plan to get accepted to this national conference.

9 thoughts on “Food, an Academic Conference, and More Food in Las Vegas”