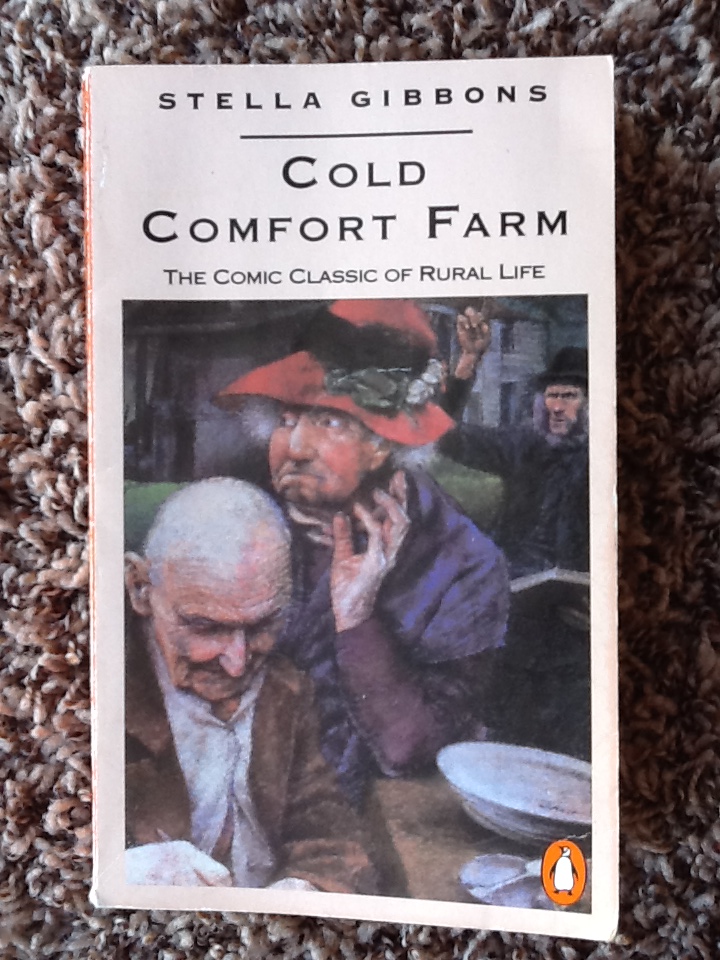 Cold Comfort Farm (1932) by Stella Gibbons and number 53 on the BBC book list is quite the comic novel.  The story centers around Flora Poste, who, when left an orphan, decides to stay with some relatives.  She sends out letters to all of the possible relations that would allow her to visit, and decides upon the people at Cold Comfort Farm, the Starkadders.

The Starkadders are backward and strange.  There are many of them, and they all have Biblical names like Luke, Amos, Reuben, Adam, etc.  Their last name is also reminiscent of a snake, and the novel contains many references to different kinds of snakes.  To what end, I’m not quite sure.  But I assume it has something to do with the Biblical references.

These references make two names stand out.  Flora, the main character, has a name not associated with The Bible and more reminiscent of nature or paganism.  Likewise, her cousin Elfine’s name brings to mind the same imagery.  And because of this connection, the two conspire to marry Elfine outside of the Starkadder family.  Flora gives her cousin a makeover and, in true Cinderella fashion, Elfine wins over a young man from a wealthy family.

This triumph for Elfine, and Flora, is just the beginning of Flora’s influence on the family.  She proceeds to make her ways and her hand known in the lives of the Starkadders, eventually convincing most of them to leave the farm.

I suspect this is an ironic payback for the mysterious wrong that a Starkadder committed against Flora’s father Robert years ago.  We never learn the exact nature of the issue nor what supposedly should belong to Flora because of it, but I suspect that the farm is what really belongs to Flora, and in an ironic twist of fate, she comes to make it her own by visiting, changing it, and convincing most of the Starkadders to leave on their own will.

This is the largest comedic plot line of the book,  but the rest of book is full of comedy and giggle-worthy situations as well.  One is the constant refrain of the old aunt, Ada Doom, who refuses to leave her room but once a year.  She’s constantly saying that she saw something nasty in the woodshed.  In fact, one passage relates this information so incoherently and repetitively that I was reminded of Faulkner’s work.  The entire family is like a Faulkner family.  There are dark secrets, baggage, and scars; however, this family finds a happy ending and overcomes these issues through the help of Flora.

The other pressing theme of the book is the city mouse meets the country mouse.  Flora is a well-bred English girl who comes to visit her backwards country relations.  Just that clash leads to many comic scenes.  Her arrival also explores the influence of “civilization” on “barbarism” or city life on country life.  The juxtaposition brings out issues, both serious and comic, of such a situation.

Just a few nights ago, my husband and I watched the movie version (1995), recommended by many of you, starring Kate Beckinsale.  Oh, we laughed.  I found the comedy even more pronounced in the movie.  Each time Aunt Ada Doom said, “I saw something nasty in the woodshed,” we burst out laughing.

The best scene may just be when Amos is preaching to his congregation.  He’s speaking of fire and brimstone with all the seriousness of a raving mad lunatic.  The congregation is shaking and quivering, because that’s the name of Amos’s church.  Their quivering gave us belly laughs.

So, yesterday, in Sunday School, my husband noticed one of the scriptures we read had a particularly poignant reference to this fire and brimstone, so he looked at me, paused, and then started quivering.  It took all the self control that I had not make a scene with a long, loud, guffaw in the middle of the quiet church meeting.  Throughout the rest of the lesson, we kept looking at each other, thinking of Amos’s quivering congregation, and swallowing our laughs and snorting.  It was great fun.  (And now you know how pious I really am.)

I liked this book and the movie.  They are similar, so much so, that I can say I enjoyed them both equally.  Many of you suggested that I get to it first (from my pile) during my holiday break from school.  I did so and enjoyed the time I spent with it.

What is your favorite part of Cold Comfort Farm?