My two-year-old daughter will not go to sleep without her books.  Not only does she want a few of them read to her before the lights go out, but she wants them all piled onto her bed.   It’s her routine.

After bath time, there’s lotion, getting dressed in her pajamas, and milk.  She must have warm milk.  She often says, in her little voice, “I want some milk, ” but because she’s having trouble with articulation, it sounds like “I wanna smoke!”  Ha!  Then it’s time to brush her teeth, comb out her almost-dry hair, and read her books.

Reading these books is a process.  She must first move them all from her bed (and around and under her bed) into the book basket next to her rocking chair.  Then, she’ll climb on Mommy’s or Daddy’s lap and read with her blankie tucked around her.  After a few stories, she’ll climb down, indicate that it’s time to sleep, and climb back up into her bed.  She wants her blankie on top of her and her singing bird lamp turned on.  The next step is to put all of the books from the basket back onto her bed.  They surround her.  (And I confess that to sometimes avoid this long process, I hide some of the books in her dresser or closet…) 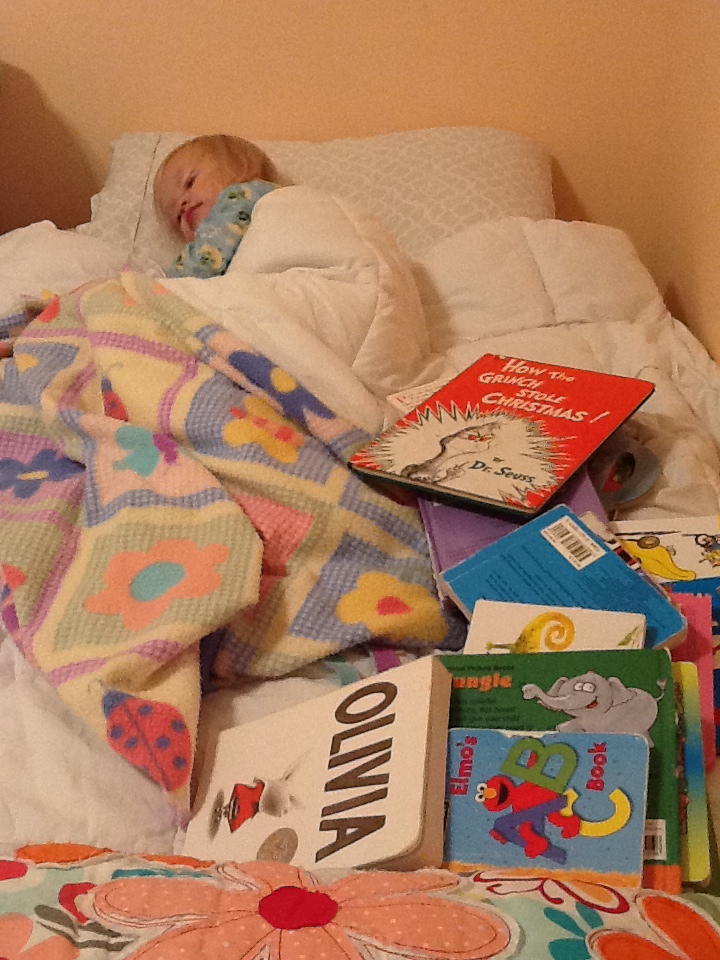 A month or so ago, my sister offered to do the honors at bedtime.  Auntie Haley doesn’t have her own children yet and enjoys partaking in the monotony of parenthood.  After going through the routine, Auntie Haley still hadn’t satisfied my little Daphne’s demands but could not figure out what else was to be done.  Teeth had been brushed, hair had been combed, books had been read, and blankie had been placed in its position of honor.  Even the singing birds had been turned on.  But, as Auntie Haley tried to shut off the light and close the door, protests were launched.  Auntie Haley called me in for backup.  I surveyed the scene and declared, “She wants her books on her bed.”

So, we piled them on her bed.  We surrounded her with books, and when one accidentally fell down between the bed and the wall, more whining began and we had to retrieve that book and place it back on top of the bed.  Once this was finished, the protests ceased and we were able to shut the door and return to grown up land, where peace exists and children are sleeping.  My sister immediately suggested that I take photographs and share this “strange” routine on the blog, so here it is!

As I pondered my daughter’s habits and thought about how my older daughter keeps her light on as late as possible so she can read her books before bed as well, I realized that reading and sleeping and inseparable.  There’s nothing like a good book or story before going to bed.  In fact, I remember many nights in my youth of reading before the lights were turned out.  My mother read from chapter books to us each night before bed.  There, we were introduced to Gary Paulsen’s Hatchet (1987), The Indian in the Cupboard (1980) by Lynne Reid Banks, and Jack London’s The Call of the Wild (1903), among others.  In bed alone, I remember spending time with Aesop’s Fables, Louisa May Alcott’s Little Women (1868), and Pearl S. Buck’s The Good Earth (1931).  Nancy Drew was also a favorite.

This year, I’ve read to my daughter the first four books from the Little House on the Prairie series, all of the Clementine books by Sara Pennypacker, and several other fun children’s novels.  Right now, my husband is reading to Olivia Harry Potter and the Prisoner of Azkaban (1999), the third book in the Harry Potter series.  They have recently finished the first two.

One particular memory of my childhood reading in bed stands out.  We were spending the night at my grandmother’s house in California, and my sister Haley and I were sharing the middle room with two twin beds.  We stayed up reading.  The last thing I remember was saying to myself, “I will just finish this chapter and then I’ll go to sleep.”   Well, the next morning came with the sun shining through the long, translucent drapes and the birds singing that it was time to wake up.  I stirred, realizing that the lamp was still on and that the book I had been reading lay open on my chest.  I had never finished that chapter, but I had gotten a good night’s rest.

As today is New Year’s Eve, I can’t help but reveal to you that my plans are not to go out among the crowds, nor will I watch the ball drop in Times Square.  I won’t even attend a neighborhood party or invite friends or family over to celebrate.  I will probably be curled up with a good book and be fast asleep before midnight even approaches.

So, Happy New Year and may your 2013 be filled with books!

20 thoughts on “Reading and Sleeping”

“His soul swooned slowly as he heard the snow falling faintly through the universe and faintly falling, like the descent of their last end, upon all the living and the dead.” —James Joyce, “The Dead”
New books! I’ve read The Bell Jar but the rest of them are on my TBR list. Have you read any of these? #books #bookstack #booklove #newbooks #mybooks #reader #readersofinstagram #tbr #reading #dontbothermeimreading #stackofbooks #stackoftheday