As you probably know, today is Thanksgiving in the United States.  My turkey has been brined and is in the oven, and my sour cream apple pies are begging me to eat them.  I have fourteen people coming to eat at my house.  Five of them arrived a few nights ago.  My dad, his partner, and their friend Doug are here.  They brought with them Elsa and Aaron from Argentina, where my dad lived for two years as a young missionary.  I’ve been practicing my limited Spanish and my dad has been translating.  We’ve been talking about family history, literature, and politics.  Later, Aaron is going to play chess with my daughter, who is just learning and is fascinated by the game.  He is a chess master and a retired lawyer.  His wife, Elsa, is a warm, happy person who has been told by her grandchildren that she is not a “normal” grandmother because she’s too fun.  I agree.  My two-year-old has already started calling her grandma.

Last night, Elsa treated us to homemade gnocchi.  In Argentina, they spell it “ñoqui.”  I don’t care how it’s spelled; it’s delicious!  Here’s how you make it.

Boil white potatoes, and then mash them with salt and pepper.  Mix them with flour as needed to shape them into long pasta-like strands on a floured surface.

Here’s a picture of my brother-in-law David trying out his gnocchi-making technique.

Once the long strands are made, cut them into little nuggets. 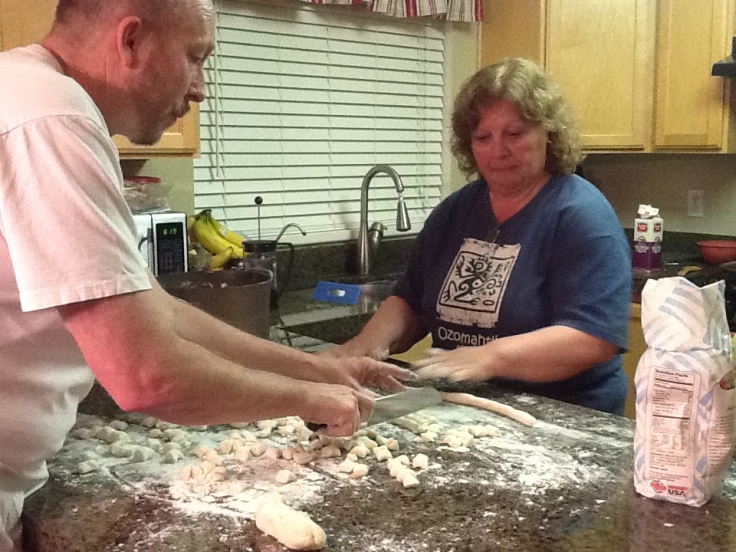 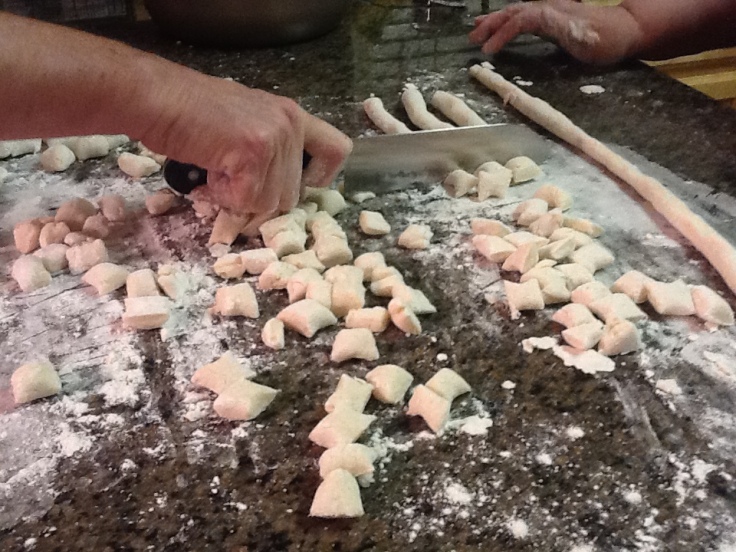 Once they are cut, boil them for a few minutes.  My dad explained that a traditional method is to first pierce them in the center with a fork, to make a little groove for sauce.  Elsa said that this was not necessary.

Here’s what they looked like before we boiled them.

After she boiled them, Elsa served them with tomato sauce.  She offered to make it herself, but we decided to save time by using good, old Prego.  She mixed the Prego with some water and cream before mixing it with the gnocchi.  It turned out delicioso!

We all enjoyed this tasty, Italian dish.  Elsa told us, “Mangia, Mangia che te fa bene,” which means in Italian, “Eat, eat that it will do you good.”