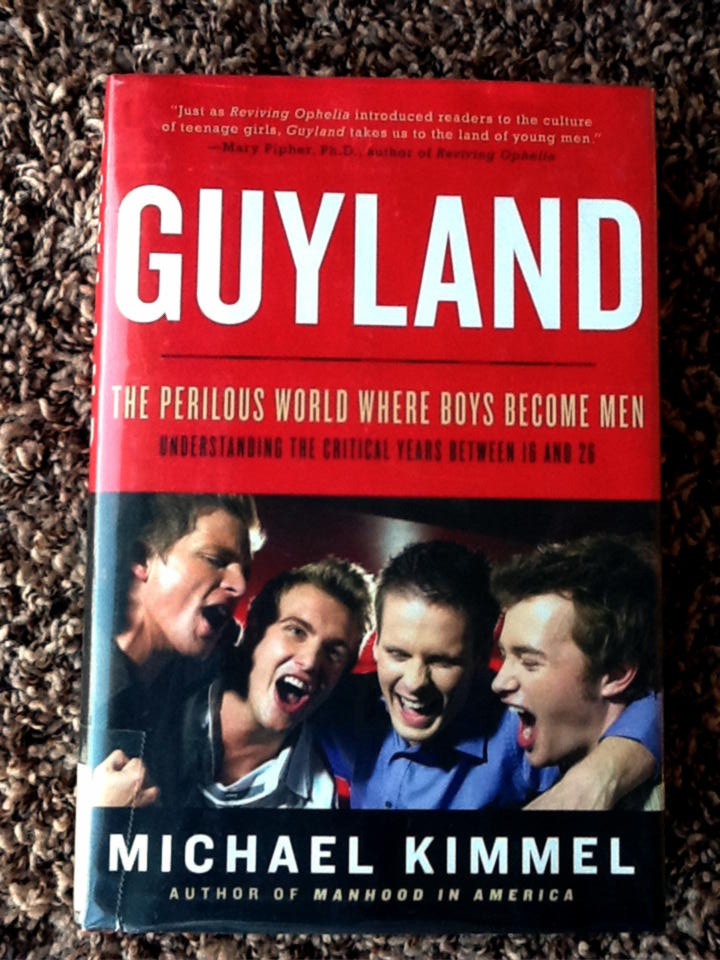 I saw Michael Kimmel speak at my university a few nights ago.  He’s a sociologist who has focused his research on gender.  He told us about his book Guyland: The Perilous World Where Boys Become Men (2008).  He uses the term “Guyland” to describe a new period of development, particularly among males, ages 16 to 26.  This is the age that men used to get married, join the job market, and finish their educations.  Now, there’s a delay.  Men tend to party it up, avoid responsibility, and live at home.  Kimmel attributes this to the economy, the advances that women have made, longevity, and helicopter parenting.

Most interesting to me were Kimmel’s ideas about women and feminism.  He said, “Women still can’t have it all.  Why?  Because men already do.”  He explained that men can work and come home to a loving, supportive family because women make that possible.  If women work, they come home to do the second shift.  They still do most of the domestic chores, even if they work.  Women cook, clean, and care for children on top of a career.

Kimmel also highlighted inequalities in sexual practices.  He visited many colleges and universities in the Midwest and south to interview the men and women there.  He observed the ritualized practices of sororities and fraternities and noted the sexual inequalities.  A few of them were quite graphic, and I won’t share them here.  The one I do feel comfortable sharing is the idea that women are still expected to be “babes” by these men.  If they aren’t, then they’re considered to be “bitches.”  One example is the fact that only fraternities are allowed to have alcohol at parties.  Therefore, they throw the parties.  If sorority sisters want in, they must pass an admission test (of being a “babe”) at the door.  Men control women’s access to college social life.

Additionally, one sorority initiation involved the women being blindfolded and presented to fraternity brothers in their underwear.  The men then marked the women’s bodies with X’s and O’s to show the women where they needed improvement.  The women discovered this by taking off their blindfolds in the “education” room, where the walls were covered with mirrors.  Women, although making great strides in equality in education and the workplace, are still expected to be “babes” and to sexually please men, despite the fact that women have never been more empowered sexually.  So if women conform, they are “babes.”  If they resist, they are “bitches.”

The other story Kimmel told will stick with me forever.  He explained that it happened thirty years ago, while he was in graduate school.  He and his classmates were interested in gender, but had no classes to take.  So they did what graduate students do: they formed their own study group. Kimmel joked that it was he and 11 women who met and discussed feminist readings.

One conversation between the women stood out to him.  A white woman made the claim that women’s experiences were essentially the same.  A black woman then asked her, “What do you see when you look in the mirror?”

The white woman responded, “I see a woman.”

The black woman said, “When I look in the mirror, I see a black woman.”

Kimmel went on to make the astute point that “Privilege is invisible to those who have it.”  To the black woman, race, class, and gender were visible because of her experiences.  To the white woman, gender was an issue.  Kimmel took it a step further and said that he applied the question to himself at the time, and he admitted that when he looked in the mirror, he saw a human being.  Gender, race, and class were invisible to him then because of his privilege as a white male.

This idea still plays out in Kimmel’s academic life.  He and a female colleague trade off teaching a sociology of gender course at their university in New York.  They always do a guest lecture for each other.  One semester, the female colleague was teaching the class, and when Kimmel arrived for his guest lecture, one of the students said, “I’m so glad you are here to finally give us an objective opinion.”  The student believed that because the teacher was female, her comments on female issues were somehow biased.  Yet, this student believed that the white, male professor to be the voice of authority and reason.

I can see this in my own teaching experiences.  I have had a few male students give me a particularly hard time about mentioning anything having to do with the female experience in my classes.  I choose my essays from an edited collection, yet one student accused me of having them read all feminist essays.  I put this claim to the test with a class exercise about argument.  The class divided into two camps, those who agreed with the student and those who disagreed.  They then worked through the syllabus and readings to make their arguments.  The leading student tried to claim that we had read some 12 essays on feminism.  When we discovered through debate that we had actually only read 1 feminist essay, a piece called “Wonder Woman” by Gloria Steinem, some students realized their bias and others continued to fight me.  I guarantee that if a male colleague of mine had taught the exact same syllabus, no such complaints would have been launched.

It’s funny, too, that I once used a Kimmel essay for my classes titled “A War Against Boys?”  My freshman would always miss the question mark in the title and the full argument of the essay, which is that there is no actual war against boys.  Ah, how our media loves to cycle through crises that don’t exist (shark attacks, welfare mothers, rampant kidnapping, etc.).

Kimmel’s presentation was enjoyable.  He asserted at one point that his favorite gender theorist is Eminem.  He also referred to neck ties as the perfect male accessory, for they are a noose at one end and point to the genitals at the other end.  He went on to explain that it’s the perfect symbol of a mind-body connection for men.

Now, I must make the argument that not all men fit into Kimmel’s findings of a new developmental period in which men are irresponsible and immature.  For instance I attended and presented at a Women’s Studies Conference this weekend.  There, I met the most wonderful, undergraduate young man who called himself a feminist.  He’s a young man of color, of religious persuasion, and of passionate beliefs.  His paper argued that if families are as important as we claim they are, then we should shift our economy to match the needs of the family.  He suggested onsite daycare at workplaces, part-time shifts, and flexible work schedules, especially for women.  I found his ideas to be inspiring and spoke with him afterwards.  I explained my experience in working for a large, religious institution that claims to put the highest value on families.  Yet, when I had my first baby, I was given the option of continuing to work 8-hour days with a 80-minute commute, or to quit.  My job, as an editor of a daily report on worldwide security incidents that would or could affect our company’s overseas personnel, was something that I finished each day in the early afternoon.  I spent the rest of the time researching for other, less pressing documents.  I could have easily done it from home or worked part-time. But, I was not allowed those options, so I quit.  I had to choose between nursing my daughter and spending that busy first-year of her life with her AND working for fulfillment and identity.  Needless to say, I ended up with postpartum depression.  My point is that women still don’t have enough opportunity and equality in the workplace, and that there are brilliant young men out there who care and who aren’t participating in “guyland.”

Overall, I am glad I stayed late on campus for Kimmel’s presentation, although it meant driving home later than usual at night and through a snowy and fog-filled canyon.  If you are interested in Kimmel’s ideas, check out Guyland.  His other works include:

Manhood in America: A Cultural History

The Politics of Manhood