The Tenant of Wildfell Hall (1848) is one of my new favorite books.  It is my first taste of Anne Brontë, and I have to say that I am hooked.  In the past year, I have read for the first time Jane Eyre by Charlotte Brontë and this novel, when before I had only ever read Wuthering Heights by Emily Brontë because of an undergraduate reading assignment for a humanities class.  Now that I have read all of the sisters, I do not want to stop.  I can see why so many people are captured by their work.

Wildfell Hall is an interesting frame narrative.  The principal narrator is Gilbert Markham, and he falls in love with a mysterious widow who comes to live in his town.  She has a young son, and Markham spends time watching her draw and playing with the young boy.  A friendship develops, but it is soon ruined by romantic tension and gossip.  The townspeople cannot stop talking about the solemn Mrs. Graham’s past, complete with rumors that her son is an illegitimate offspring of their own Mr. Lawrence.

Gilbert falls for these stories after witnessing Mrs. Graham’s close relationship with Lawrence.  He keeps his distance from her and even gets into a boyish physical fight with Lawrence, putting him in bed for weeks.

However, the best part of the novel follows, in which Mrs. Graham gives Markham her journal to clear up his confusion.  Those papers reveal the hell that was her marriage, and many marriages of that age, because of women’s restricted freedoms and lack of property and parental rights.

Mrs. Graham is really Mrs. Helen Huntingdon, and she’s hiding from her husband.  She married Mr. Arthur Huntingdon against her aunt’s best judgment and pays heavily for her mistake.  The chapters describing her courtship and subsequent marriage to this monster should be required reading for every young woman of dating and marrying age.  She falls into the traps that still abound today when it comes to choosing a mate.

Huntingdon proves to be a brute.  Several times in their relationship, I couldn’t help but be reminded of a rapist.  He never actually rapes her, but his language, actions, and posturing amount to that sort of control.  During their courtship, he is described as thus: “Mr. Huntingdon came suddenly upon me . . . I felt his strong arm round my waist” (140).  His attentions are not unwanted, but he’s so forceful with them.  Once they are married, he blames her for his problems and is angry with her piousness, saying: “I declare it is enough to make one jealous of one’s Maker―which is very wrong, you know; so don’t excite such wicked passions again for my soul’s sake” (167).

He’s also a raging alcoholic, and often disappears from their country home to London, spending months there with friends, gamblers, and prostitutes.  Theirs is the definition of an unhappy marriage.  Helen writes, “Arthur never will let me be satisfied with him.  I have never, for a single hour since I married him, known what it is to realize that sweet idea, ‘In quietness and confidence shall be your rest’” (216).  These uttered words evoked so much sympathy in me.  How awful it would be to have a marriage that only caused anxiety.

Helen’s papers are detailed and lengthy, making up most of the novel.  She recounts in excruciating detail a dying marriage, one that today most women would leave and feel free at doing so.  She eventually finds the courage to run after discovering her husband’s adulterous actions with a house guest, but she does so without money or the law on her side.  She must essentially flee in the cover of night, kidnapping her son and relying on the help of loyal servants and her brother to hide her.

I find it interesting that her issues are relevant today, which is perhaps what makes the Brontë sisters’ work so appealing.  They wrote about the heart of life, the difficulties of being a woman, and the complications of romance.  Nothing has apparently changed, for their stories continue to portray the same problems we now face.

Luckily, women are now free to leave bad marriages. Custody arrangements are much more favorable towards women (perhaps to a fault), and women are free to make and keep their own money.  Inheritance can be theirs, and threats, abuse, aspersions, adultery, and vile behavior do not have to be tolerated from one’s mate.

I won’t give away the ending of the novel, but it’s satisfying.  It also accomplishes being both realistic and contrived at the same time.  The moment I finished reading, I got onto my swap.com account and put all of the Brontë sisters’ work on my “want” list.  If I don’t end up swapping for them soon, I will end up buying them. 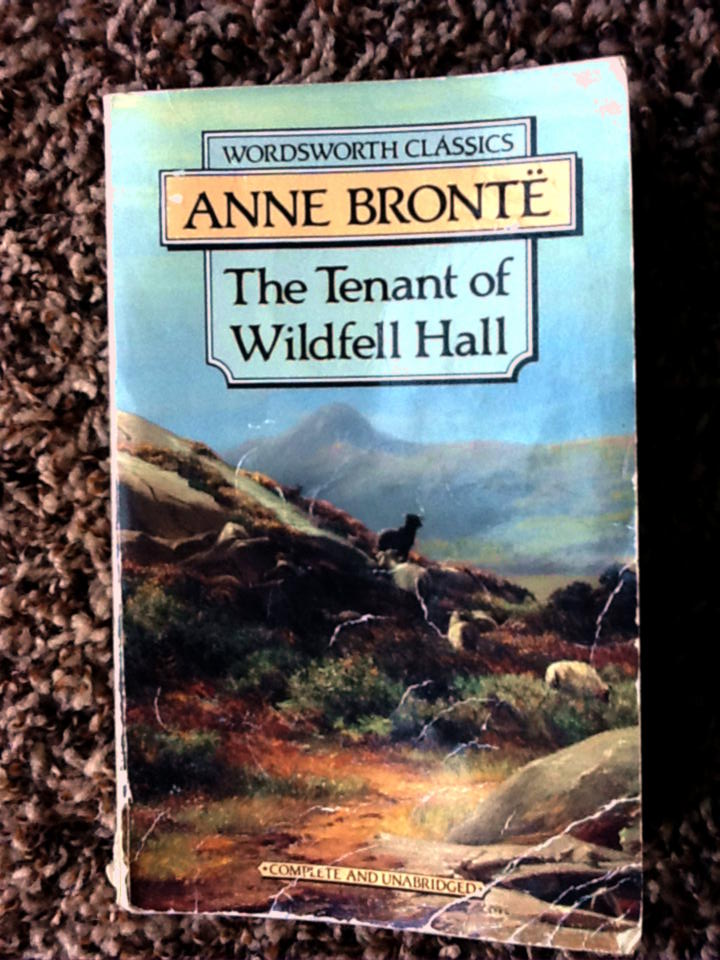 I can’t get enough, especially when compared to more modern novels.  A few weeks ago, I tried to pick up Major Pettigrew’s Last Stand by Helen Simonson, but the prose immediately fell flat and I didn’t get far.  I am not saying that it is a bad novel.  Perhaps I should have given it more of a try, but when I then turned to The Tenant of Wildfell Hall, I couldn’t put it down.  I found myself immersed in the beautiful prose, the insights on human nature, and the glimpse into a world in which women struggled to enjoy what I now enjoy.  I did not want it to end.

20 thoughts on “I’m a Sucker for Victorian Novels: The Tenant of Wildfell Hall”