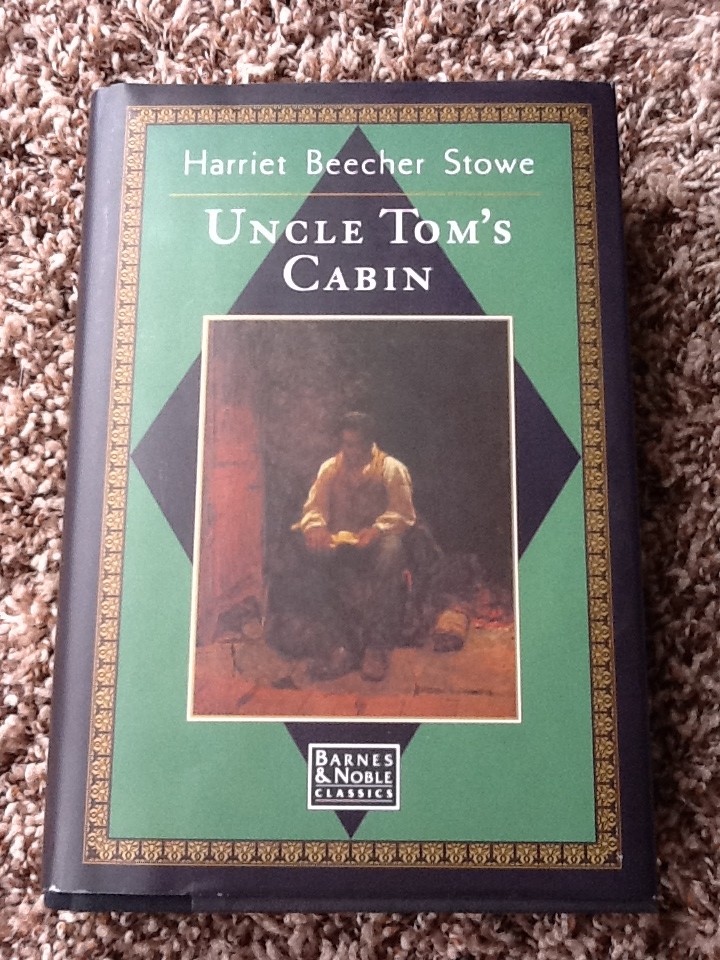 I have been in group settings in which people will say, “I don’t really care about [insert societal problem] because it doesn’t affect me.”  Or, “I don’t want to talk about that because it upsets me.”  Notice that both of these statements end with the pronoun “me,” and consequently these statements are essentially selfish.  Now, it might surprise you to know that Harriet Beecher Stowe, called by Abraham Lincoln “the little woman who wrote the book that started this great war,” also uttered the above statements at one time when it came to slavery (Showalter 131).  Yet, in the last chapter of Uncle Tom’s Cabin, she beseeches both Northerners and Southerners to end the great wrong of slavery.  But she admits, in the third person, “For many years of her life, the author avoided all reading upon or allusion to the subject of slavery, considering it as too painful to be inquired into, and one which advancing light and civilization would certainly live down” (441).  She essentially hid her head in the sand because it did not affect her.  Why should she be upset by slavery?

Yet, she admits that her passion for righting this wrong grew when she realized that “Christian and human people” wanted to return escaped slaves to captivity and when she heard Northerners passing the buck by claiming that they had no Christian duty to help the slaves.  These insulting and unjust remarks caused Stowe to have “a desire to exhibit it in a living dramatic reality” (441).  She demonstrates this reality magnificently in Uncle Tom’s Cabin (1852). 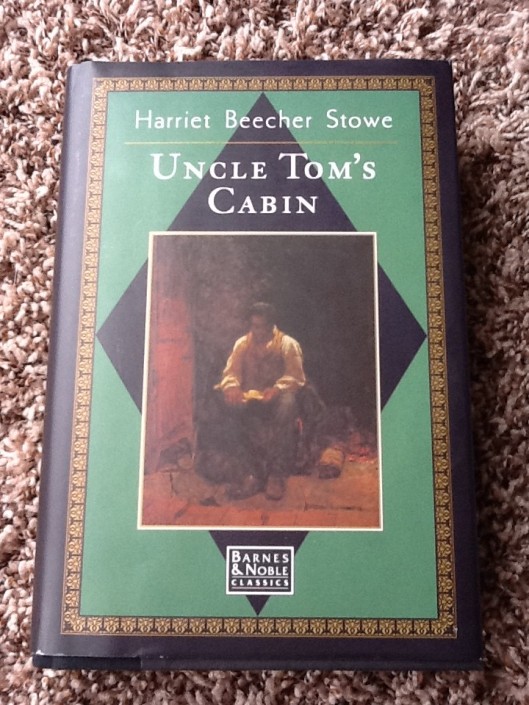 Stowe also endeavored to portray slavery in a fair way, and I believe she has done so.  She covers several different narratives of the slave experience, showing both harsh and devilish masters and those with more Christian values and subtle ways.  Legree is unkind man who ends up owning Tom toward the end of the book.  He is the man responsible for Tom’s death, which is not in vain.  Tom teaches us a great lesson about forgiveness, patience, and faith.  He is a Christ figure throughout the book, showing charity and perhaps a slave’s ability to be more Christ-like than his captors.

The book opens with two men negotiating over slaves.  Mr. Shelby is indebted to a rougher man who agrees to take slaves for payment.  The two men call in the young son of Eliza and have him sing and dance for them, much like a performing monkey.  This characterization bothered me, for it is one that lingers of the African Americans.  However, Mr. Shelby turns out to be a loving and kind master, but because of his foolish financial decisions, he must allow the other man to take his slaves.

One of these slaves, Eliza, takes her son and runs for it before she can be removed from the Shelby plantation.  She performs an amazing feat, one reported to be true by Stowe, of fleeing across the Ohio River on floes of ice with her son in her arms before the slave traders can capture her.  This incident is heralded as miraculous and a pure example of a mother’s love and its power.

The other slave to be sold is Tom, who in his calm way goes without a fight.  He ends up in the St. Clare family, where he is well loved and promised freedom. However, Mr. St. Clare dies before he fulfills this promise, and Tom is left to the mercy of Marie St. Clare, a ridiculously selfish woman who refuses to honor her husband’s wishes.  She is a comical character and one of my favorite for the pure entertainment value.  She is constantly in distress over phantom illnesses and fatigue and cannot allow anybody to have her spotlight, not even her angelic and dying daughter Eva.  Once Eva dies, Marie is convinced that nobody can possibly be suffering in their grief as much as she is.  She remains selfish.

Yet her daughter Eva is Christ-like, showing her aunt Ophelia how to properly teach and care for Topsy, a slave child who has never known love, affection, or family.  All she knows is harsh words and fierce hits.  Topsy has trouble with stealing and following directions, and Miss Ophelia feels ready to give up on retraining this slave to behave.  Ophelia uses kindness and gentle words, to no avail.  Others are ready to say, “See, I told you,” when it comes to being gentle with slaves.  However, young Eva tries her hand at soothing Topsy through love.  She hugs the girl, embraces her, and they cry together.  Eva tells Topsy that she loves her, and Topsy breaks down, finally feeling familial love that whites take for granted.  Eva is an example of charity, the pure love of Christ.

Because Tom does not gain freedom through the St. Clare’s, he ends up being sold to Legree, an unkind and downright mean New Orleans master who ends up beating Tom to death.  In his final hours, Christ-like Tom, who is earlier described as willing to lay down his life for his friends, says, “I forgive ye, with all my soul!” (411).  I don’t know about you, but I have trouble forgiving people who cut me off in traffic or bullies from junior high school.  I am amazed and impressed with Tom’s ability to be patient in his afflictions, which include being beaten to death, and to then so freely forgive his tormentors and murderers.  And he does all of this to protect two of his women friends who have escaped from the plantation.

Upon Tom’s forgiveness, Legree scoffs and enjoys the fact that Tom is about to die because it means Tom will not be able to speak and preach of Christianity any longer.  To this, the author steps in, inserting her own omniscient voice as she does throughout the novel in an effort to drive the message home to her fellow Americans.  She writes, “Yes, Legree; but who shall shut up that voice in thy soul?” (411).  Good question.

Harriet Beecher Stowe published Uncle Tom’s Cabin in 1852, and the first shots of the Civil War were fired in April 1861.  Certainly, Stowe had a hand in forwarding abolition and in bringing the plight of African Americans to the attention of many people.  According to Elaine Showalter, a prominent feminist historian and critic, Stowe’s book is “the most widely read American novel of the century” (107).  The novel appeared at first in two volumes and sold 305,000 copies in the first year in the United States and two million worldwide (107).  “By the end of the decade, it had been translated into eighteen languages . . . [and] was also the first of the great global best sellers that changed the marketing and influence of fiction” (107).  I find it most inspiring that all of these praises are to a novel by a woman, when so few women were included in the canon of American literature before the feminist movement of the 1970s.  And not only does Stowe garner this attention and literary fame for a masterpiece of literature, but she does it for a work that is written to ease the plight of a downtrodden race.  She did it for the cause of freedom and to convince her fellow countrymen that their system of slavery could not be tolerated any longer.  Perhaps that is why her work wrought such an influence on the world.

However, she was not without opposition. The novel angered many in the South and some people banned the book.  Others wrote anti-Tom books of their own, proclaiming slavery to be a divine system that would ultimately lead to rewards in heaven.  Despite Stowe’s use of Christianity and the teachings of The Bible to prove slavery’s falseness, these anti-Tom books did the same thing, using their form of Christianity to prove white supremacy.  Thankfully, Stowe’s view is the one that has ultimately prevailed.

Her use of Christianity and “The Declaration of Independence” informs or at least foreshadows the great leadership of Reverend Dr. Martin Luther King, Jr.  In his famous “I Have a Dream” speech, he too uses Biblical allusion, language, and repetition to drive home the fact that African Americans deserved the same rights as whites.  He, too, used Thomas Jefferson’s “The Declaration of Independence” to move and inspire those who would listen.  And, he had the privilege of also echoing The Great Emancipator, Abraham Lincoln, Stowe’s contemporary, in the opening lines of his speech.  Stowe is among these great men in her laying of a foundation of freedom for all.

Stowe is also a woman after my own heart, as she insisted to her husband that she must have a room of her own (a phrase made famous by Virginia Woolf) in order to write her novels.  I too have a room of my own, not yet perfectly decorated but sufficient in space and amenities for me to study and write.  I can only hope that the time I spend in my own room will be as productive as Harriet Beecher Stowe’s.

If you haven’t yet read Uncle Tom’s Cabin, I highly recommend it.  I will admit that I tried to read it once a few years ago and couldn’t get past the first few chapters.  However, I am glad I gave it a second chance, especially given my current fascination with the African American experience.  I can’t stress enough what a magnificent gem this book is to our nation’s history.