I made an effort to pick up my house today.  I do regular cleaning projects, like mopping, dusting, vacuuming, and laundry.  But it seems like it’s never clean due to toys, toys, and more toys.  Each time I find myself surrounded by a pile of these toys, I have one book run through my head: The Berenstain Bears Think of Those in Need by Stan and Jan Berenstain.  The basic idea of the book is that Mama bear (it’s always the mama) notices that the family has too much stuff and they must find a solution.  That solution is, obviously, to give their extra things to charity.  Before they come up with this solution, they are surrounded by pots, balls, toys, clocks, knickknacks, stuffed animals, clothes, and other household goods.  This is my life, encapsulated in a children’s book nightmare: Too Much Stuff!

I have learned to deal with this clutter in five ways.

1. Give it away to charity, just like the Berenstain Bears.

We have several thrift stores close by that take donations.  I am constantly putting toys and clothes into bags for donation.  And, it’s tax deductible.  Sometimes I have to convince my husband to give up some of his things (like the old bandages from his many knee surgeries or his broken pole vaulting pole―both of which, rest assured, we threw away, not donated), but he likes the tax benefits for donating because he’s a CPA.  But why is it always the Papa, like in this picture, who resists such deep cleaning? 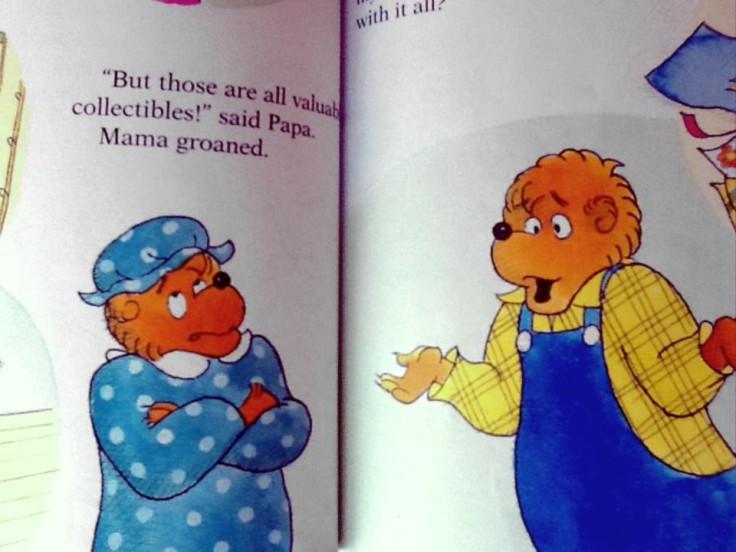 Did your parents ever threaten to throw away whatever was on the floor after you went to school.  No?  Well my mother did.  I can’t remember if she ever followed through, but I find myself now not threatening to throw things away, but just slyly throwing things away.  You know, the odd half of a crayon that has seen better days, the plastic miniature balloons that once topped a birthday cake several years ago, small parts of Legos or farm animals that are clearly not being cared for and won’t be missed, one of hundreds of tiny doll hairbrushes we have acquired over the last seven and a half years, the McDonald’s plastic toy that is peeling lead, or the rubber duck in the bathroom that is growing mold.  I throw all of this away beneath my children’s radar, until my daughter says, “Mom, where is my disgusting old stuffed animal that posed a health hazard to me and spent most of its time under my bed?”  It is then I must confess with a guilty look but a confident voice that I threw it away because it was broken, damaged, forgotten, or just plain gross.

3. Offer my daughter money to clean things up.

She wants a hamster.  I do not want a hamster.  We had some fish.  That sufficed for a while, but they have since gone the way of the great white watery toilet, so another pet is on her mind.  If she could choose, she would get a cat or a dog.  I am not a fan of cats and dogs.  She loves them.  Fortunately, I win because she is allergic to both animals.  Anyhow, I told her she could have a hamster if she earned the money and bought one herself. We priced out hamsters and hamster homes and all the other accessories we’ll need.  It comes to about eighty dollars.  She has earned some forty-two dollars so far through a cupcake and lemonade sale and household chores.  So, she is more than happy to clean things up a bit for some cash. In fact, she cleaned one of our bathrooms a week or so ago and did a fabulous job.  And when she gets home from school today, she has offered to dust the blinds.  I can’t say no to that!

4. Shove it all behind the couch.

I have our couch at an angle.  It looks pretty and so posh, just like a Pottery Barn catalog picture.  It also makes our family room feel bigger.  The best part is that when unexpected guests arrive, I can take armfuls of toys (and empty juice boxes and stale sandwiches) and quickly toss them behind the couch and nobody is the wiser.

5. Actually organize and clean up.

I have done this a few hundred thousand times over the years.  I bought a truckload of plastic containers and labeled them with pictures and names of the belonging toys.  This is supposed to help the little ones know what goes where.  It worked for a while, if I stood over the children while they cleaned and cracked a whip each time they sorted a Polly Pocket shoe into the blocks container, or when they accidentally put a Barbie accessory into the Barbie doll container.  However, things have gotten jumbled over the last few months.  It looks like another deep organizing session is in order.

How do you stay on top of your clutter?  Do you, like me and the Berenstain Bears, have too much stuff? 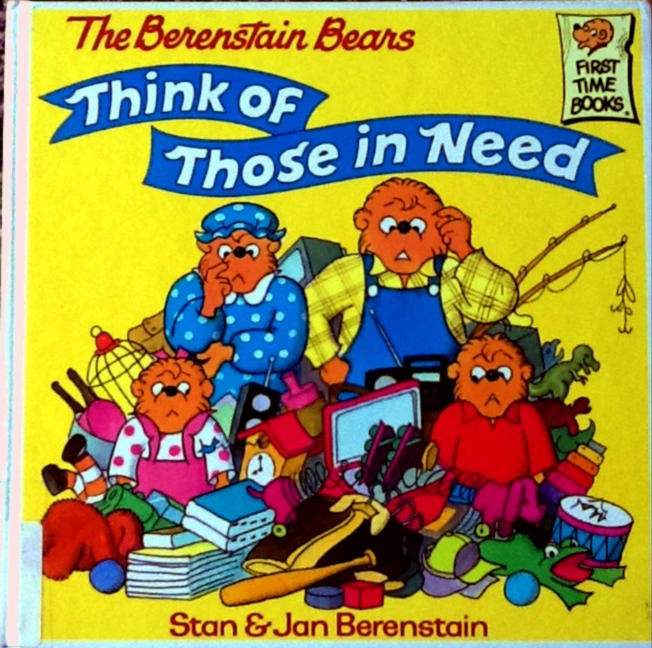 33 thoughts on “The Berenstain Bears and I Have Too Much Stuff: Five Suggestions for Organizing”