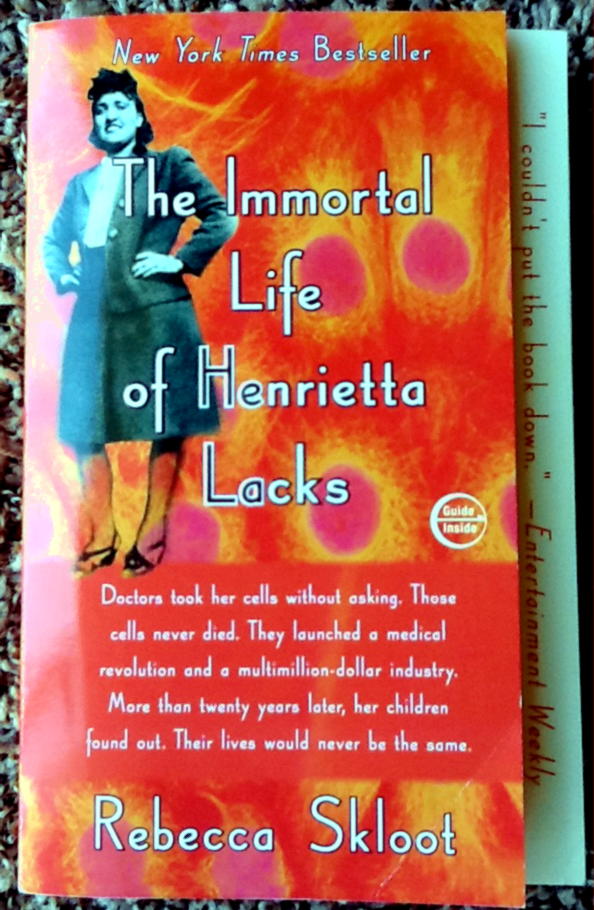 I picked up The Immortal Life of Henrietta Lacks expecting a charming bildungsroman of a young girl in the south who worms her way into the hearts of a family.  Don’t ask me why.  The title somehow brought to my mind the heartwarming novel Saving CeeCee Honeycutt.  Boy, I was wrong, and pleasantly so.

The Immortal Life of Henrietta Lacks (2010) is a fascinating look at the world’s first immortal cells, called HeLa, that have been growing in a lab since the 1950s.  Scientists use them for research and experimentation.  The cells came from an African American woman who died of cancer, Henrietta Lacks, hence the name HeLa.  These cells did not make her family rich nor pull any of them out of poverty, squalor, or ignorance.  They have instead made others rich. 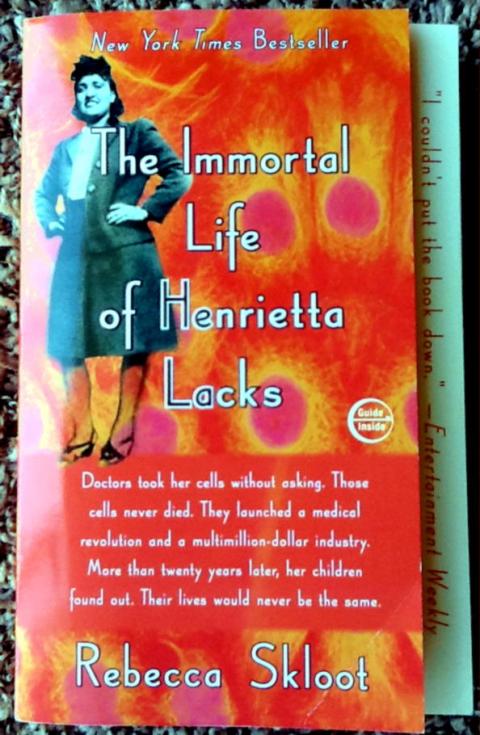 Despite the interesting scientific history and facts in this book, the condition of the Lacks family struck me most poignantly.  Henrietta’s life seemed to be of low quality, yet she lived almost 100 years after the end of slavery.  She still occupied what slaves called the “home-house.”  Henrietta and her cousin Day “had been sharing a bedroom since she was four, so what happened next didn’t surprise anyone: they started having children together.  Their son Lawrence was born just months after Henrietta’s fourteenth birthday” (23).  She did not finish her education, and neither did her children.  The legacy that slavery left is a grim one, and certainly featured with warts and all in the lives of the Lacks family.  Her life highlights the fact that the condition of African Americans has taken an appallingly long time to improve.

A most enjoyable part of reading this book was doing so with my neighborhood book club.  The other women seemed to enjoy and appreciate the book as much as I did.   I would say its choice for the book club was a smashing success, so if you need to suggest a book for yours, this is a great one.

In our book club, we happen to have a woman who holds a Master’s degree in Microbiology.  Hearing her thoughts and experiences with the HeLa cells was a delight and a fascination to me.  She talked about how she used the cells in the lab at college and how they are well known and well used.  We all became enthralled with asking her questions and getting her perspective on the whole story.  She admitted that when using the cells, she had no idea who Henrietta Lacks was or the story behind her cells being cultured and grown for the last sixty or so years.  She also assumed that Henrietta Lacks was white, and had heard the pseudonym Helen Lane as the name of the person whose cells they were.

The confusion of these cells extends to the family of Henrietta, whose daughter Deborah, is probably most affected by the use of her mother’s cells in modern science.  Deborah suffers panic attacks, near strokes, bouts with mania, and insomnia in her search to discover more about her mother’s cells.  She is also so limited in her education that she does not know what exactly is meant by the fact that her mother’s cells are still growing.  She assumes that there are clones of her mother walking around England or that her mother is being kept alive in a lab somewhere to be continually and cruelly tested upon.  Of course, these ideas are not true.  But to Deborah, any number of Frankenstein-like experiments could be happening to her mother.

Because of these misconceptions and fears, the most touching part of the book is when Deborah and her brother Zakariyya meet Christoph, a researcher at Johns Hopkins who takes the time to show them through the lab and explain just exactly what the HeLa cells are and what is done with them.  Christoph gives them a framed picture of their mother’s cells highlighted with colors and blown up to look as a piece of art.  The reverence and understanding that Deborah and her brother show is so moving; it is a triumph in this story full of twists, turns, hurt feelings, and broken promises.

The author, Rebecca Skloot, is also skilled at weaving the tale.  She goes back and forth between the 1950s, when Henrietta’s cells were taken and grown, and the current day, when Henrietta’s children are still reeling from the effects of their mother’s cells being used so famously for science.  Skloot is also brave.  I admire this in her because I have yet to become brave.  I once had the opportunity to call and talk with a senior editor at Ms. Magazine.  A cousin of mine gave me the number, as the senior editor is a close friend of hers.  I sat on that phone number for weeks.  Finally, my cousin wrote to me: “Be brave!”  Those words gave me the courage and I made the call, a call that ended up starting this blog and giving me some much needed confidence and information.  For Skloot, it takes almost a year for her to make lasting and meaningful contact with Deborah.  She calls many times, goes through many people, and finally gets the story she wants.  But she isn’t just a cold-hearted science writer or reporter. She comes to care about this family and has started a foundation using the proceeds of her book to help the Lacks descendants attend college.

And there is the key to lifting people from poverty: education.  W. E. B. Du Bois argues this in his The Souls of Black Folk, and Simon Haley tells his famous son Alex in Roots: The Next Generations that education is the way up and the way out.  These ideas hold true.  Giving people money doesn’t improve their circumstances.  Giving them education and the tools to make money and handle money is more productive and effective.  Although it seems unfair that the Lacks family has not benefited from the use of their mother’s and grandmother’s cells in scientific experiments and enterprises, perhaps monetary gain would not have done them much good anyway.  Who’s to say?  I do know that Skloot’s book has done a lot of good.  She has given the family information, educated them along her own journey to uncover Henrietta’s story, and ultimately shared the proceeds with them through scholarships.  I admire her for this and her diligence in getting this story, although her sources were hard to contact.

This is a New York Times bestseller that I highly recommend.

31 thoughts on “A Bestseller Worthy of the Praise: The Immortal Life of Henrietta Lacks”

Same book, three slightly different colors. I first bought this in Cape Town, South Africa, and have since acquired two more copies. The extras will be gifted to @lizzieksbookishways and @literaryjourney for a buddy read! #buddyread #bookpic #amitavghosh #reader #books #redbooks #booknerd #amreading
I’m reading Old School by Tobias Wolff today. I’m cozied up on the couch that faces my southern windows. The snow has stopped falling, and there is finally sunshine. It is glinting off of the gilding on some of my books. Distracting! #sundayshelfie #bookshelf #amreading #books #bookstack #readingtime #bluebooks #purplebooks #color