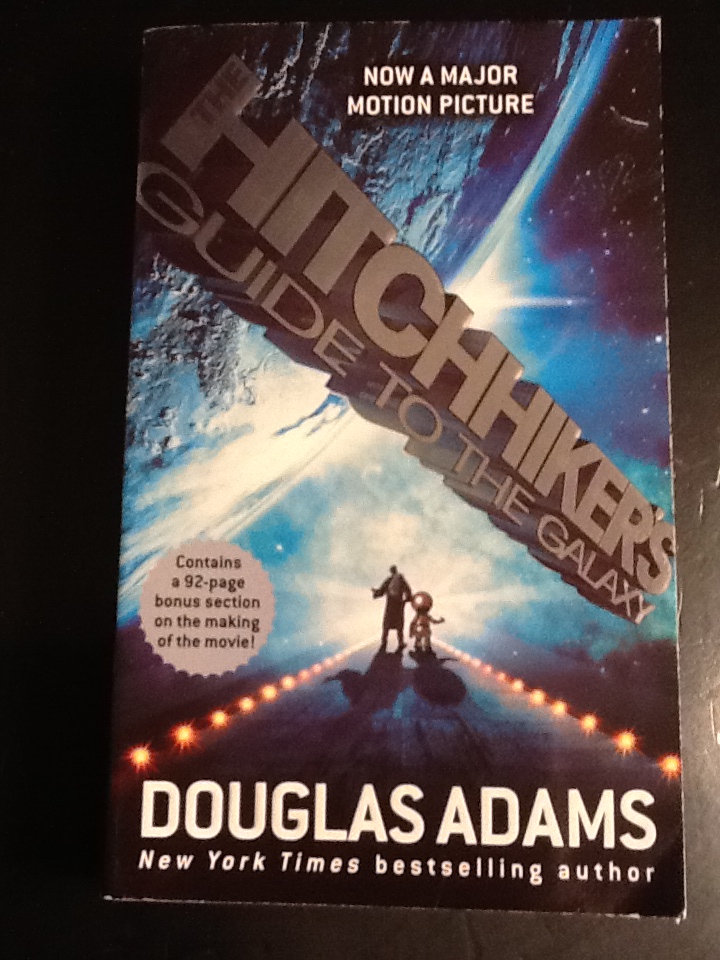 Why do mass market paperback books smell so funny? I could barely hold my copy of The Hitchhiker’s Guide to the Galaxy up to my face because of the awful aroma emanating from it. (Yes, it’s used. I got it through swap.com) Later, when I had tossed it onto the counter after finishing it, my husband picked it up and the first thing he said was, “Ewww. This book smells bad!” Yes, it does.

The Hitchhiker’s Guide to the Galaxy (1979) is number 25 on the BBC book list and let me be honest. I hated it! Its only redeeming quality is that it was short, so I could read it in a day and get it over with and off of my list. But other than that, I don’t understand its popularity or appeal. 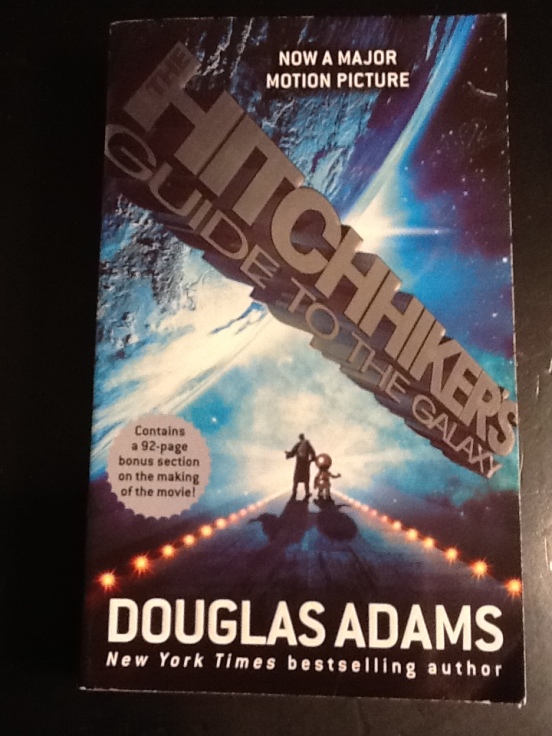 It began as a radio show in 1978, and has since spawned six books (one of which I had the misfortune of reading), plays, television series, comic books, and a computer game. Why? For the love of good writing and comedy that actually makes you laugh out loud, why?

So, yes, one of the reasons I did not enjoy it has to do with the comedy. It is supposed to be funny. But I didn’t laugh once. Not once! I could see where Douglas Adams was trying to make a joke, but he failed miserably. This is because of his terrible writing style. He writes in clichés and adverbs. As I started keeping track of the clichés, I noticed that they occurred every ten pages, and probably more likely on every page, but I tried to be lenient in my finding of them. Here’s a sampling of what I found:

“nervous as hell” – Isn’t there a better way to say this?

“things are not always what they seem” – uh huh.

“on the gravy train” – who came up with this one anyway? What IS a gravy train?

“a pretty tree-lined city . . . as far as the eye could see” — I require more thoughtful descriptions that give me a sense of the actual surroundings.

Okay, so I’m being a little mean. But, as we know, when you’re reading a book you don’t really want to read (see my Freshly Pressed post about Unwanted Reading Recommendations), it feels like torture.

In the first fifty pages, I noticed that the human characters kept stating the obvious. I thought, “Hmm. This could be deep. Perhaps the author is illuminating the poverty of thinking that plagues our species, and this will be contrasted with the superior sophistication of alien life forms.” No, the only poverty of thought came from the author himself. He could not write the characters with any more feeling or depth because he was not capable of it, which surprises me since Adams had a Master’s degree in literature from Cambridge. This book is certainly fodder for the bestseller list, which I rarely look at or read, and can be attempted by anybody who reads at an eighth-grade level.

I did imagine the main character, Arthur Dent, to look like Ted Danson’s character Arthur Frobisher in the TV series Damages. And I liked the fish that Arthur put in his ear to translate languages into his brain. Wouldn’t that be neat?

Given my reaction to this novel, my husband is also wondering why Barnes and Noble has come out with a leather bound version of The Hitchhiker’s Guide to the Galaxy. He buys me one of these beautiful books each year for Christmas, but I have threatened to make him sleep on the couch if he ever buys me this one.

Am I wrong? Do you like this book? Feel free to disagree!

28 thoughts on “The Hitchhiker’s Guide to the Galaxy: A Smelly Book Full of Clichés”