Fast forward about fifteen years.  I’m married, living in the suburbs, and riding the bus into the city for work.  My sister recommends that I read Goodbye, I Love You during my commute.  I take her advice.  I get a copy of it from the library, and I begin to read.  On that 40-minute ride to work, my childhood memories of Carol Lynn Pearson come flooding back to me.  Tear sting my eyes and stain my cheeks.  I arrive at work forever changed and unable to put the book down.

You see, my dad is gay, and he left our family in the mid-1980s, around the same time my mom seemed to have an admiration for Carol Lynn Pearson, whose husband Gerald was also gay.  Her book Goodbye, I Love You is about their courtship and marriage, his struggle as a gay man with a family, and her struggle as a loving wife who must learn to let go.  This book seemed like an anchor that had been thrown to me.  My sister knew how much reading Ms. Pearson’s account of her life would impact my own emotions on our childhood.  That’s why she recommended the book. 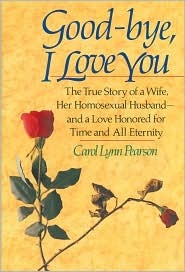 This book impacted me so because I never realized that anybody had experienced what I had experienced.  I guess I should have understood that the world is full of people with problems and issues.  I should have guessed that a few of them (or maybe many of them) had fathers or loved ones who were gay.  However, until reading Goodbye, I Love You, I did not fully comprehend that I was not alone.  Also interesting to me was the fact that Ms. Pearson has four children, all of whom knew what it was like to have a family similar to mine.

Growing up, I did not speak to anybody about my dad.  I loved him, I visited him as frequently as possible, and I kept his secret.  I found out when I was eight or nine years old.  The discovery was traumatic, but I worked my way through it.  An account of that experience was published in Sunstone in December 2008 and can be read here.  However, I kept this secret to myself because my mom said that my dad didn’t want anybody to know.  I’m not sure if that’s true; I guess I should ask him.  But we did live in a small, rural town where people would likely talk or shun.  I believe my mom did not want this to happen, and I can hardly blame her for that.

Carol Lynn Pearson’s book allowed me to feel comfortable talking about my experience.  It helped me to realize that there are issues related to my experience that must and should be talked about.  It allowed me some freedom of carrying this heavy load alone.  I did not have to keep my life’s circumstances a secret.  I could talk to friends about what happened.

After finishing the book in a day or two, I of course called my sister to discuss its contents.  I also sent an email to Carol Lynn Pearson herself, expecting no response.  (I had previously written to one of my favorite authors, Joyce Carol Oates, who never responded.  However, I can hardly blame Ms. Oates.  My letter wasn’t anything special or worth responding to.)  Yet, Ms. Pearson responded immediately.  The day I sent the email, she emailed me back.  She informed me that her daughter, named Emily like me, had also married a gay man and had started a website (no longer in existence) called We Are Wildflowers.  I found this information interesting and tragic.

Although I had dated some boys in high school who later turned out to be gay, I had carefully selected my husband based on the fact that I knew he was NOT gay.  He didn’t show any overt interest in my piano playing (my gay boyfriends always had), he did not know how to sew or French braid hair, and he absolutely loved college football.  Now, I know these are stereotypes, but to me they were comforting and emblematic.  I did not want to repeat my mother’s experience or open my children up to the possibility of divorce or heartache because of homosexuality.

Now, because my dad is gay I have learned many good things.  I have a well-earned empathy for those struggling with this issue and possible complications with their families and friends.  The experience taught me that it is not my job to judge others, but to instead focus on what I can do to make my own actions better.  It has also taught me not to base my impressions of people on one aspect of their life or character.  Everybody is different, and everybody deserves a chance to be loved and accepted.

Carol Lynn Pearson has another book on this subject called No More Goodbyes: Circling the Wagons around Our Gay Loved Ones.  My sister bought it from a display Ms. Pearson manned herself.  Afton burst into tears upon meeting Ms. Pearson, who kindly put her arms around my sister and calmed her.  Not a word was exchanged, yet Ms. Pearson knew what had inspired those tears.  After their poignant moment, my sister bought two copies of the book: one for her and one for me.  Both copies are signed with personalized messages.  It is a book I treasure, not necessarily because of its content, but because it represents a connection I’ve had with Carol Lynn Pearson since I was a child.

39 thoughts on “Carol Lynn Pearson and Me”